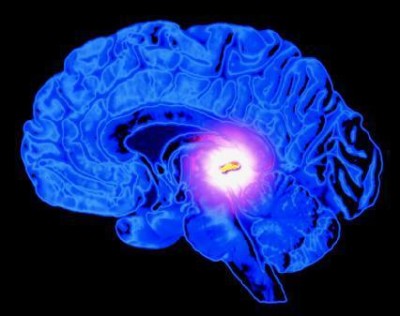 The importance of the pineal gland has been acknowledged for many millennia. For nearly every ancient civilization throughout the world, it occupied a prominent position not only in their systems of anatomy and medicine, but also their systems of philosophy, cosmology, and spirituality.

While Western science looks upon this vital gland as simply another part of the endocrine system (albeit an important part), the ancient Egyptians, Chaldeans, Indians, and Chinese all regarded it as a point of immense spiritual importance within the body.

In many cases, it was referred to as the third eye (a term that modern spirituality has inherited). According to many spiritual lineages, the third eye is the interface between the physical and the spiritual worlds, and thus the “opening of the third eye” is the gateway to spiritual progress.

Even Rene Descartes—the philosopher who we have to thank for the scientific method, algebra, and many other foundational aspects of modern scientific inquiry—believed that the pineal gland was the seat of the soul.

Needless to say, modern science isn’t exactly on board with this theory—and third eye vernacular is still confined to yoga studios, retreat centers, and a small vanguard within the natural health community.

Nevertheless, scientists and spiritualists alike can agree on one thing: the pineal gland is vitally important to the health of the physical body.

The gland’s main secretion is melatonin, which regulates sleep-wake cycles (more melatonin = more sleepiness), as well as sexual development (melatonin production slows down during puberty).[1] Melatonin is also one of the most potent brain antioxidants in existence, so in this sense, you can also think of the pineal gland as part of the brain’s built-in detox system.

According to recent research, there may be other little understood chemicals that the pineal gland secretes too. For example, scientists discovered an exceedingly mysterious chemical called dimethyltryptamine (DMT)—a strongly psychoactive compound that may be implicated in dreaming and out-of-body experiences—in the pineal glands of rats.[2] DMT is often called the Spirit Molecule.

While this area of study is still in its infancy, such discoveries offer great hope for bridging the gap between the scientific and spiritual understandings of the pineal gland.

Regardless of what side of the argument you fall on, though, it’s essential that you keep your pineal gland functioning optimally.

Your pineal gland needs your help

We’ve talked in past articles about the many burdens that modern living places upon your endocrine system. Environmental toxins are chock-full of endocrine disruptors, and iodine deficiency is a rampant problem (iodine is essential for proper endocrine function). All of this means that the pineal gland is under constant attack. 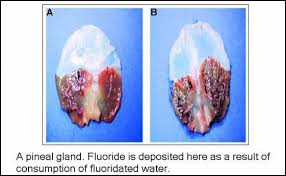 Calcified pineal glands show up as solid-looking objects on brain scans. The worse the calcification gets, the more the gland’s functioning is inhibited.

So how can we help keep our pineal glands free of calcification and functioning in peak condition?

Detoxification is the name of the game—and all the usual rules apply.

Detox practices. Integrating fasting, juice cleansing, and oil pulling into your life will all help give your body’s natural detox systems a leg up. Doing so is especially important if you’ve lived a relatively sedentary lifestyle or consumed an unhealthy diet in the past (but even if you’re an active, healthy-eating person, your body is still prone to the onslaught of environmental toxins).

Detoxifying foods. The easiest way to turn your body into an unstoppable, detoxifying machine is to continuously eat a detoxifying diet. Turmeric, coconut oil, kale and other dark greens, raw cacao, chlorella, spirulina, probiotics, apple cider vinegar, beet juice, and oregano are all excellent choices. Read more about how to build the perfect detoxifying diet here.

Supplement properly. As I mentioned above, most people are deficient in iodine, so you’ll want to supplement in order to maintain optimal levels (kelp extracts are the best source). Vitamin C and glutathione also work wonders, as they simultaneously support the immune system, lower inflammation, and boost the body’s ability to take care of its own detoxification.

Ditch the bad stuff. Lastly, it should go without saying that you should avoid consuming fluoridated water, mercury-contaminated fish and dental fillings, and all industrially processed products laced with health-disrupting chemicals. It’s impossible to avoid all the toxins to which you’re subjected, but consciously staying away from as many as possible is immensely beneficial.

By making these practices a part of your everyday life, you’ll be able to keep your pineal gland working in tip-top shape.

Once you begin to feel the effects of living a detoxifying lifestyle, try throwing some meditation into the mix (simply focusing the awareness on the third eye can catalyze some incredible experiences).

Even if you’re skeptical about the spiritual possibilities of the pineal gland, you’ll be pleased by what happens when you take special care of this extraordinary organ. At the very least, you’ll be keeping your endocrine system nice and balanced (which translates to better sleep, more energy, greater immune function, balanced mood, and more). And who knows…an experience of third eye opening just might catch you by surprise and turn you into a believer.