written by Ryan
Facebook0Tweet0Pin0
You are here: Home / Body / Fluoride in Your Water is Poison (Don’t Believe What the CDC Tells You) 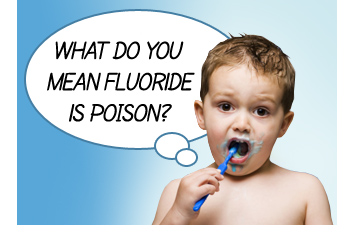 If someone told you about a chemical that has been definitively linked to thyroid dysfunction, cognitive decline, heart disease, weakened bones, mineral deficiency, and all-around accelerated aging…wouldn’t you do your best to avoid it?

If the mountain of evidence against this noxious substance grew taller and taller (with no evidence in support of it, besides uninformed denial), you’d think that consumers and regulatory agencies alike would have no trouble rallying against it…right?

This is precisely the case with fluoride, and yet the CDC (as well as other U.S. agencies whose sole job is to keep us safe via regulatory measures) still claims that there’s nothing wrong with it. They don’t provide any counter-evidence or formulate any useful arguments—they simply ignore all claims made against the practice of water fluoridation, and continue to laud it as “one of the top ten public health achievements of the twentieth century.”[1]

For many individuals and organizations engaged in the ongoing battle to end water fluoridation, this harmful and unethical practice is quickly becoming one of the top health tragedies of our time.

Nevertheless, the tide is turning agonizingly slowly. 70% of Americans still drink fluoridated water every day, and in large part, the ongoing propaganda campaigns of organizations like the CDC, the American Dental Association (ADA) and the Pew Charitable Trusts still have the public convinced that they should keep calm and carry on.

But make no mistake: if you’re not already worried about fluoride, you should be.

More than 100 published studies (and counting) demonstrate that fluoride is harmful to the brain, and many have even drawn a direct link between fluorosis and acute neurotoxicity.[2] Even the EPA now calls fluoride a “chemical having substantial evidence of developmental neurotoxicity” (at least there’s one regulatory agency that’s coming clean).[3]

One prominent study found that fluoride is a potent endocrine disruptor,[4] and another even linked fluoride consumption to our society’s high incidence of ADHD.[5]

The message is loud and clear: fluoride is not something you should be consuming.

Is the CDC oblivious, or is it hiding something?

In case you haven’t noticed, the mainstream misinformation surrounding water fluoridation is completely ill-matched to the research findings mentioned above. The saccharine optimism with which authorities laud it is so over-the-top that, from time to time, our inner optimist wants to give these lumbering bureaucracies the benefit of the doubt.

Could all the proper data simply be slipping through the cracks—not making it into the right hands? Perhaps no one is incentivized to speak up, paralyzed by the tedium and complexity of government work?

As tempting as it is to chalk up conspiracy to good-ole incompetence, though. the situation is a far darker one. The CDC knows very well how harmful fluoride is.

In many cases, it’s their own statistics that allow us to be informed about the effects that fluoride is having on the population. For example, they reported that at present, 41% of Americans have dental fluorosis—the unappealing discoloration of teeth that is a clear sign of fluoride overexposure.[6]

It’s unsurprising that the CDC has allowed public attention to rest on this fluoride-induced dental issue. By focusing on this mainly aesthetic problem (which pales in comparison to fluoride’s other effects, and is merely the symptom of a far more dangerous problem), they’re able to keep the fluoride discussion pigeonholed in the arena of rudimentary dental hygiene.

Meanwhile, evidence is surfacing that they’re working to cover up and discredit any information about the greater damages caused by fluoride. Upon recovering a correspondence between the CDC, ADA, and Pew, fluoridation opponents discovered that more than a quarter of the 320-page document was completely blanked out. What was left to be read portrayed a consortium of conniving individuals seeking to preserve the public acceptance of fluoridation at all costs.

Ditch fluoride and reclaim power over your own health

If I’ve said it once, I’ve said it a hundred times: it’s imprudent to put your health in the hands of government agencies. Whether you believe that the nationwide continuation of water fluoridation is maliciously conceived or simply a matter of bureaucratic laziness, the effect on your health is the same.

Fluoride is a menace to the health of your brain and body, and you need to take whatever measures necessary to remove it from your life.

Purchase a water filtration system (and a shower filter, as well) that specifically advertises its ability to filter fluoride, and stop using fluoride toothpaste (studies show that fluoride isn’t even effective at preventing tooth decay anyway).

Check out FluorideAlert.org if you want to get more involved in the fight against fluoridation. Regardless, the best way to take a stand is simply to take action in your own life now; doing so is the only way to ensure that you can protect yourself and your family from the terrible health effects of fluoride.

A Texas man has discovered a new pitcher that filters out fluoride, heavy metals, prescription drugs and disease causing contaminants…

==> See the proof in this short video