written by Ryan
Facebook0Tweet0Pin0
You are here: Home / Body / Drink Beet Juice for a Brain Boost 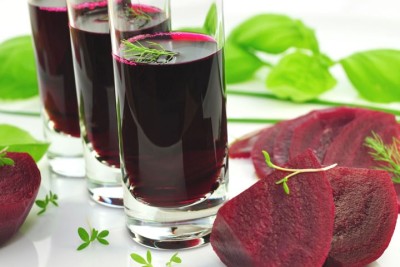 Cognitive enhancement is a hot topic these days.

With Alzheimer’s and other forms of cognitive dysfunction on the rise, the race is on to discover new ways to keep our brains healthy and strong.

New research is also beginning to reveal that optimized brain health is one of the keys to everything from high performance and decelerated aging to proper sleep and positive mood—so even if you’re not worried about cognitive decline, you still have a lot to gain by paying close attention to your brain’s health.

This certainly isn’t a new concept. In Ayurveda, an ancient Indian system of medicine that has been practiced for thousands of years, the health of the mind and intellect (both physiological and psychological) is considered an invaluable aspect of overall vitality and longevity.

Ayurveda (and other similar systems of natural medicine) use specially chosen foods and herbs to improve cognitive function, thus honoring the immense intelligence that these natural substances hold within them.

Mainstream medicine denies that dietary choices and other lifestyle modifications can have any measurable effect on cognitive health (especially in the case of Alzheimer’s, which they consider “incurable” and “unpreventable”).  They prefer to continue tinkering with experimental Alzheimer’s drugs, which seem to have little or no positive effect on patients.

Meanwhile, the natural health community is awash with clinical data demonstrating the incredible efficacy with which certain foods can improve cognitive functioning. Turmeric and coconut oil have gained the most fame in this department, with pomegranate juice and a Chinese herb called ginkgo biloba trailing not far behind.

But here’s one unassuming foodstuff that hasn’t previously been acknowledged as the immensely powerful cognitive enhancer that it is: beet juice.

A powerful brain boost with a single dose

The only problem with a lot of the brain-boosting foods and herbs out there (there’s a whole class of them in Ayurveda, called medhya rasayana herbs) is that they work subtly over time.

These days, we’ve become pretty accustomed to the immediate gratification of stimulants like caffeine, so not receiving an instantaneous boost can feel like a letdown.

But beet juice is able to rise to our overstimulated society’s challenge.

A recent study showed that a single serving of raw beetroot juice immediately improves cognitive performance. Participants drank either 450 mL of beet juice or a placebo, and were administered a series of cognitive tests 90 minutes later; those who drank the beet juice performed significantly better on the tests.[1]

Preliminary results suggest that beet juice could be an even better brain booster than our beloved coffee and tea—and its use comes without any of the nasty side effects that accompany the consumption of caffeine (which stimulates the central nervous system and taxes the adrenals).

So here’s how it works…

Most brain stimulants jack up the nervous system and essentially force it to work faster and harder. This works wonders for cognitive enhancement for a short time, but we’re running on borrowed time—the boost is inevitably followed by a crash, during which your body and brain sequester energy for their much-needed recovery process.

Long-term stimulant use (yes, this includes coffee) can “burn out” the nervous system and weaken the immune system, because your body never has time to recover before being bombarded by another wave of stimulation (and you eventually become dependent on this stimulation).

Beet juice improves brain health in a much simpler and more sustainable way. Beets contain high levels of dietary nitrates, which are strong vasodilators (blood vessel dilators). Nitrates, which lead to a higher nitric oxide content in the body and brain, thus help increase oxygen flow in the brain. Additionally, they improve the efficiency of endothelial function (the function of blood and lymphatic vessels), which means that they can carry out the same task with less oxygen (this is referred to as a “lowered oxygen cost”).

Simply put: the brain gets more oxygen and needs less oxygen to perform its work, so every cognitive task becomes accelerated, sharp, and clear.

Ready for a glass of beet juice?

Luckily, beet juice is a treat in and of itself—its cognitive enhancing properties are just icing on the cake. So give it a shot!

Drink it straight, or try combining it with apple juice and ginger for a perfect balance of sweet and spicy (both also have their own brain-boosting properties). Or, keep your juice’s sugar content low by mixing beet juice with wheat grass and other greens.

You’ll be amazed by how much energy and focus beet juice can provide. Before you know it, you may even adopt is as a replacement for (or at least a healthy complement to) your morning coffee.