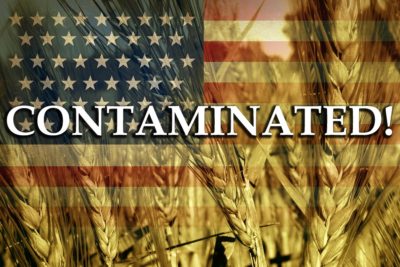 We’ve written before about the horrors of glyphosate—the poisonous weed killer liberally used on a staggering number of crops throughout the United States.

Although the International Agency for Research on Cancer (IARC) now considers glyphosate “a probable carcinogen,” and even though a mountain of evidence has come to light linking it to both health and environmental degradation, herbicide manufacturers still deny its toxicity. And even more absurdly, these companies claim that it’s only toxic to weeds, and that there’s no way that the chemical ends up in agricultural food products.

Experts how long feared that glyphosate could easily contaminate both our planetary ecosystem and planetary food chain, unless its widespread use is curbed. Countries around the world are imposing outright bans on its use—having openly acknowledged it as genotoxic and carcinogenic—and yet the United States shows no signs of banning (or even restricting) its use.

Yet now another piece of incontrovertible evidence has arisen proving the much-ridiculed opponents of glyphosate correct. Glyphosate has been detected in shockingly high levels within a variety of consumer packaged products—thus proving that the chemical has made its way deep into our global food chain.

Watch out for these products

After commissioning the testing of a number of packaged products, the Alliance for Natural Health (ANH-USA) discovered frightening levels of glyphosate contamination. Topping the list was Quaker Instant Oatmeal (Strawberries and Cream flavor), which contained a whopping 1,327.1 parts per billion (ppb) of this noxious weed killer.

But you might be thinking…those are quintessentially conventional and “unhealthy” products; of course they’re contaminated. While it is strange for oatmeal to be so severely contaminated (because oats are not a GMO crop), your logic would still be fairly sound.

Here’s the problem, though: even some supposedly “healthier” products showed contamination. This part of the list includes many products that are specifically advertised as non-GMO, such as Dave’s Killer Whole Wheat Bread (136.4 ppb), the Whole Foods Brand 365 Coffee Creamer (104 ppb), and Original Silk Soy Creamer (86 ppb).

We’ve already written about the pitfalls of gluten, dairy, and soy—but this ANH-USA testing lengthens the list of reasons to avoid them.

So, because the presence of glyphosate in our consumer food chain is indisputable, let’s return to herbicide manufacturers’ claims that it poses no risks to your health.

Is glyphosate really so bad for you?

Let us refresh your memory…

Furthermore, glyphosate worsens and accelerates antibiotic resistance by killing good bacteria and speeding the mutation of pathogenic bacteria. You could even say it’s disrupting the planetary microbiome—it’s ravaging natural ecosystems, and has been linked with bee colony collapse around the world.

And it’s everywhere. Packaged food products are just the beginning—just proof of how deeply it has penetrated the food chain. A U.S. Geological Survey found glyphosate in 59% of sampled water sites, 50% of soil and sediment samples, 8.4% of groundwater samples, and even 10% of water that had already undergone treatment at wastewater treatment plants.[2] Glyphosate has even been detected in woman’s breast milk and urine.[3]

How to protect yourself

Joining the fight to ban glyphosate is one of the most important actions you can take to safeguard your body and our planet.

But in the meantime, as the agricultural industry continues to douse our food with poison, you simply have to do your best to keep it out of your system.

Avoiding the products listed above is a good start—but this by no means is an exhaustive list. Assume all non-organic products to be suspect, even if they’re labeled as non-GMO. Organic products tend to be much cleaner than conventional products, but even they’re not immune.

We covered in another article, it’s been discovered that glyphosate-spraying conventional farms can sometimes contaminate nearby organic produce—and these “organic” foods are then used to make the packaged products that we believe to be healthy, simply because of that little green USDA label.

To be safe, eat only organic food products and adopt lifestyle practices that supercharge your body’s detoxification abilities.

The lab results above illustrate a frightening reality that we need to accept: nowadays, it’s nearly impossible to avoid glyphosate completely, so we must combine meticulous dietary choices with detox strategies in order to keep our bodies clean and clear of this prevalent poison.

Eat naturally detoxifying foods, boost your body’s production of natural antioxidants like glutathione and melatonin, supplement with super-supplements like liposomal vitamin C and turmeric, and integrate detoxifying activities into your life, like oil pulling and sauna sessions. All of these practices will not only keep your body clear of glyphosate’s deleterious effects—they’ll also rejuvenate and optimize every aspect of bodily functioning, so that you can feel your absolute best.