Even Your Organic Food Could Be Contaminated With Toxic Pesticides

written by Ryan Greendyk
Facebook0Tweet0Pin0
You are here: Home / Featured / Even Your Organic Food Could Be Contaminated With Toxic Pesticides 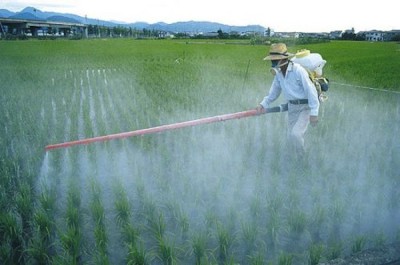 You may already be familiar with glyphosate, the pesticide constituent with which Monsanto and the agricultural industry is poisoning our entire planet. Not long ago, concerns about the usage of this noxious chemical on our nation’s crops were shrugged off as conspiracy paranoia—but now even the World Health Organization officially considers it a probable human carcinogen.

New study data is emerging all the time, and findings point to a simple but frightening fact: the toxicity of glyphosate has been grossly underestimated.

Glyphosate triggers massive inflammation, taxes the body with oxidative stress, throws your hormones out of whack, and destroys your microbiome (many experts attribute Celiac disease and grain intolerance to this damage). That pretty much covers the root causes that lead to nearly all major health conditions, so it’s no wonder that glyphosate has now been linked with immune dysfunction, antibiotic-resistant bacteria, obesity, depression and other mood disorders, cancer, inflammatory bowel disease, ADHD, autism, Alzheimer’s disease, Parkinson’s disease, infertility, reproductive issues, developmental deformities, and ALS.[1]

One study demonstrated that even glyphosate levels in the parts-per-trillion range cause breast cancer proliferation and extreme estrogen imbalance—and researchers fear that similarly miniscule amounts of the chemical can lead to the other conditions listed above.[2] For this reason and many others, some scientists believe that glyphosate is the most dangerous and toxic chemical ever approved for commercial use.

Amidst all of this overwhelming evidence, Monsanto continues to deny all toxicity claims. The corporation has employed a ludicrous array of tactics to undermine the information reported the WHO: attacking the professional credibility of the International Agency for Research on Cancer (IARC), the division of the WHO that published its report on glyphosate, downplaying any and all negative evidence against their beloved chemical, and funding propaganda campaigns to drown out legitimate research.

Monsanto has even stooped to laughable word games, claiming that labeling their pesticides as “carcinogenic” doesn’t actually link the chemical to cancer. I’m sure that it’s hardly necessary for us to point out the absurdity in this statement.

The point is that, despite loud public outcry, Monsanto has shown its commitment to continually growing their multi-billion-dollar agricultural empire—regardless of what effect it may have on the health of you and the planet. And the larger their operations grow, the more widespread glyphosate contamination becomes.

A groundbreaking U.S. Geological Survey found glyphosate (as well as its toxic degradation product, AMPA) in 59% of sampled surface water sites, 8.4% of sampled groundwater sites, and over 50% of soil and sediment samples. Even 10% of water in wastewater treatment plants was found to contain glyphosate (and a whopping 80% contained AMPA).[3]

But at least organic food is safe…right?

In light of this increasingly grave situation, those wishing to protect themselves from the negative health effects of glyphosate have retreated into the perceived safety of organic food. But recently, a tirelessly health-conscious company, Tropical Traditions, has revealed that organic food is not as safe as we think it is.

They recently tested commercial organic grains grown in Montana, North Dakota, and Canada, and found them to contain levels of glyphosate that were nearly as high as in conventional, non-GMO grains (between 0.03-0.06 mg/kg, compared to 0.07-0.09 mg/kg found in conventional produce). While GMO grains contain much higher levels yet (between 3.3-5.7 mg/kg), this presence of glyphosate in organic products is deeply distressing—particularly given the chemical’s uncanny abilities to trigger health problems at shockingly low doses.

All organic grains they examined failed the glyphosate test, with the exception of organic rye and organic millet, as well as organic wheat from small-scale farmers in Wisconsin.

How can this be happening?

It’s human nature to want a well-defined culprit at whom we can point our fingers—especially when it comes to industrial, health-destroying schemes. For better or worse, though, the perpetrator is hard to identify in this case, as the problem extends through every level of the agricultural system.

Pesticide manufacturers are obviously the instigators of the whole problem—if companies like Monsanto would stop pushing their toxic products into the hands of farmers, our world could begin to heal the damages caused by glyphosate. Farmers may be to blame, as well, though—it’s suspected that many “organic” farmers use glyphosate to kill late-season weeds that grow in between crops, and even that they “dessicate” their crops with glyphosate (this kills the crop early, ensuring that they’re able to harvest it before early snowstorms come).

When it comes time for the USDA to give these contaminated crops the organic seal of approval, they too drop the ball—their “acceptable” pesticide levels are far too high, and if farmers demonstrate that glyphosate hasn’t been directly applied to the crop during its growing season, farmers are even given 5% of wiggle room. These numbers are based on standards set by the EPA, which recently raised the allowable limit for pesticides in food by a worrying degree.

And lastly, some glyphosate contamination is simply out of everyone’s control. Some scientists fear that glyphosate is reaching organic crops through rainwater and irrigation, and that contaminated water supplied could make it increasingly difficult to produce truly glyphosate-free food.

How to protect yourself (and our entire food system)

Luckily, companies like Tropical Traditions are leading the charge to offer officially tested, glyphosate-free food. In order for them to succeed, we must all vote with our dollars by supporting their products instead of those contaminated by Monsanto’s poisons.

Whenever possible, research products to see if they’ve been tested for glyphosate content (chances are that “glyphosate-free” will enter mainstream health food nomenclature before long). Source your food from small-scale companies and farmers, and be willing to ask tough questions about how it was grown. As long as consumers remain ambivalent about issues like glyphosate contamination, GMO labeling, and insufficient government regulation, the toxic agricultural industry will carry on with business as usual.

By only supporting companies and products that you know are committed to ridding the world of glyphosate, you can play your part in protecting the future of our food and water supply—as well as the future of your personal health and well-being.