Got (Chemicals in Your) Milk?

written by Ryan
Facebook0Tweet0Pin0
You are here: Home / Body / Got (Chemicals in Your) Milk? 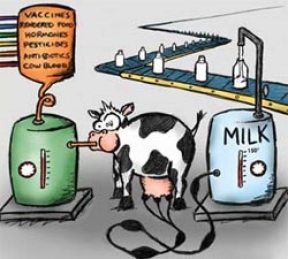 It seems that the conventional food industry’s propaganda machine has stooped to a new low. According to their marketing campaigns, milk is now a superfood.

They’ve been singing the “milk does a body good” song for some time now. Through commercials and billboards, milk is touted not just as a tasty and enjoyable beverage, but also a bone-building staple of a healthy diet.

But a superfood? Milk consumption has decreased in the U.S. by 25% since the 1970’s,[1] so perhaps they thought their darling product’s image was in need of a facelift.

Milk certainly can have some nutritional benefits. It’s packed with nutrients and enzymes that boost vitality, support the microbiome, and yes, help maintain the structural integrity of your muscles and bones—but only if it is unpasteurized.

Pasteurization destroys nearly everything that is wholesome about milk, and transforms it into a dead, health-sapping liquid. More on the wonders of raw milk a bit later in this article.

Suffice it to say that conventionally produced milk (the vast majority of milk on the market) is decidedly not a superfood. We reported in a previous article that milk consumption has been linked to a worrying array of side effects, including diarrhea, cramps, gas, and all sorts of other gastrointestinal issues, diabetes, arthritis, cancer, infertility, and more.[2]

There’s plenty of reasons why milk causes such widespread imbalance in the body, but here’s one of the main ones: milk is full of chemicals. And according to recent studies, this issue may be even worse than health experts originally thought.

The chemicals lurking in milk

Get this: studies in the Journal of Agricultural and Food Chemistry and other publications found more than 20 twenty different chemicals when they tested a standard glass of milk.[3]

The chemical list included numerous hormones, antibiotics, and even painkillers. And that’s not even counting all the nasty pathogens that often live in industrially produced milk (so much for pasteurization making our milk safer).

Here’s a brief list that should make you think twice before drinking your next glass of milk (or consuming dairy products in general).

Hormones. The average glass of milk contains levels of various hormones, like estrone, 17-beta-estradiol, 17a-esthinylestradiol, and the infamous recombinant bovine growth hormone (rBGH). All of these hormones, which are used to increase milk production and body mass in cows, are also terribly unbalancing for your endocrine system.

Growth hormones increase your risk of developing cancerous tumors and becoming infertile, and they compromise your immune system. They even increase the level of pus in your milk—which is disgusting on its own, but also makes milk go rancid much more quickly.

Antibiotics and other drugs. All those growth hormones make cows much more susceptible to infection, disease, and inflammation, so they’re nearly always treated with a dizzying array of drugs: antibiotics to stave off disease, damaging painkillers to quell the chronic inflammation, and all sorts of other pharmaceuticals, including beta-blockers, lipid regulators, anti-epileptics, anti-malaria medication, and more. And all these chemicals are passed on to you through your milk.

Pesticides. The cows that produce conventional milk are fed with GMO corn, soy, and other highly inflammatory, pesticide-soaked grains. GMO advocates claim that pesticides couldn’t possibly end up in finished produce, but these virulent chemicals go even further down the chain.

One study presented conclusive evidence that pesticide residues can consistently be found not only in the feed given to cows, but even in the milk that they produce.[4] Perhaps this why the dairy industry is fighting so hard against GMO labeling—such labels would reveal the secret of their inhumane, unhealthful practices once and for all.

Radionuclides. Another study even found that conventional milk contains radioactive isotopes, including strontium and cesium. Very few theories even exist about how radioactive materials could possibly get into commercial milk—but some experts suggest contaminated water and animal feed, or contamination from military weapons testing.

So here are your best options…

Whether or not you’re morally against the animal exploitation that is an inevitability of the dairy industry, the information presented above should motivate you to make some changes when it comes to consuming milk and dairy products.

The best possible choice is to drink raw cow or goat milk. As mentioned at the outset of this article, raw milk is packed with nutrients, healthy fats, and beneficial bacteria.

Here’s the problem: obtaining raw milk can be a challenge. It’s technically illegal to sell unpasteurized milk in stores, so you’ll have to track down farmers directly. You’ll need to find a farm that’s already been vetted by health-conscious individuals, or else ask a lot of questions (in order to ensure that the farm’s animals are grass-fed, free range, and chemical-free).

If you must drink pasteurized milk—even the organic, grass-fed variety—keep your consumption to a minimum. Store-bought milk that is organic and grass-fed will not contain antibiotics, growth hormones, or other noxious chemicals, and the cows that produce it are not fed GMO grains—but it still carries all the same issues that come along with pasteurization.

Store-bought almond milk in particular has been criticized for being unhealthful and exorbitantly priced. If you really want to drink a health-supporting milk alternative, your best bet is to make your raw almond milk at home (check out the recipe here).

By adopting these practices, you can insulate yourself from the horrendous, health-destroying products of the conventional diary industry…and you can show them that their propaganda isn’t working on us.