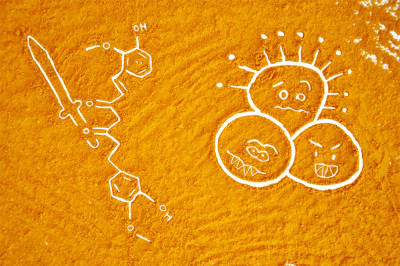 It’s no coincidence that a traditional Hindu word for turmeric, haldi, literally means “healthy.” A steady flow of continually accumulating research has medical scientists convinced that turmeric really is a wonder spice like no other—thousands of studies have revealed its ability to prevent and treat over 600 different diseases and ailments.

Researchers have been astounded to find that turmeric effects the body in 175 unique ways—as an anti-inflammatory, an antioxidant, an endocrine modulator, a neuroprotectant, an anti-cancer agent, and a natural antibiotic, just to name a prominent few.[1] So if you’re wondering if all the hype about turmeric is true…it is.

The multi-faceted healing abilities of turmeric have been known and implemented for thousands of years by practitioners of systems of medicine such as Ayurveda and Traditional Chinese Medicine. Now that modern medicine has finally caught up by proving these ancient claims correct, the next question for researchers is clear: how does turmeric hold up against Western medicine’s beloved pharmaceuticals and OTC drugs?

Here’s the short answer: it leaves them all in the dust.

Let’s take a look at how turmeric compares to leading condition-specific drugs. These comparisons are backed up by rock-solid medical research, and emerging studies continue to demonstrate one simple fact: turmeric meets or exceeds the efficacy of drug treatment for nearly every major disease, without any complications or side effects.

This two-sided approach allows turmeric to give the immune system an antioxidant boost while curbing inflammation. The same can’t be said for NSAID’s, which can sometimes hamper immune function by inhibiting the release of inflammatory chemicals (inflammation is, after all, an immune response).

These drugs can also cause ulcers, bleeding in the stomach and intestines, and other related gastrointestinal issues—particularly with long-term use. Turmeric carries no side effects whatsoever, and its health benefits as a high-level adaptogen only become more and more pronounced with long-term use. And because a 2014 study demonstrated that turmeric works just as well as (or better than) ibuprofen at relieving aches, pains, and other effects of inflammation, choosing it over NSAID’s is a no-brainer.[2]

Steroids and corticosteroids (the latter of which mimic adrenal hormones) are used to treat a number of serious ailments connected with inflammation, such as immune-related skin rashes and conditions, lupus, asthma, vasculitis (inflammation of the blood vessels), myositis (chronic inflammation of muscle tissue), gout, and rheumatoid arthritis. While these drugs have a role to play in medicine, they also have profound shortcomings—the relief they offer is fleeting, and their usage comes with the risk of an encyclopedic list of side effects.

Several studies have shown that turmeric is capable of offering relief from these same conditions, without any of the worrying side effects. One prominent study showed that curcumin, one of the active constituents in turmeric, works just as well as the corticosteroid dexamethasone for treating respiratory issues and injuries due to lung transplantation.[3]

The incidence of diabetes has reached epidemic proportions. One of the reasons that pharmaceutical methods of treatment have been so unsuccessful is because of their limited approach—nearly all diabetes drugs target one (or at most, a few) of the primary symptoms of diabetes, without actually addressing underlying causes.

Turmeric tackles both at once. Its incredible anti-inflammatory and antioxidant qualities—thanks in large part to curcumin—quell the systemic inflammation of oxidative stress that often creates disastrous complications for diabetics. And according to a 2009 study, curcumin works 400 times better than Metformin for both increasing glucose sensitivity. [4]

Heart disease often goes hand in hand with diabetes, because the rampant oxidative stress caused by diabetes damages arteries and causes a buildup of cholesterol. Traditionally, statin drugs like Lipitor are offered as the solution. Same story here, though: statins don’t always offer consistent results, don’t address the root cause (the oxidative stress), and can cause potentially fatal liver and kidney damage.

Once again, turmeric wins the prize by working as effectively as leading statins at lowering cholesterol—and it achieves lasting results by eliminating the underlying oxidative stress and inflammation. Curcumin is usually given the credit for these feats, but attempts to create a synthetic curcumin-derived pharmaceutical haven’t been successful, which suggests that turmeric has other undiscovered tricks up its sleeve.

Drugs for depression and other mood disorders

Antidepressants are drugs with notoriously inconsistent results. New studies even suggest that the pharmaceutical industry’s theory about the mechanism of depression is almost wholly incorrect, which leads many to believe that antidepressants have been barking up the wrong tree for some time. Most worrying of all, antidepressants seem to increase the risk of relapsing into depression later—“depression” is literally listed right on the package insert as one of the potential side effects of Prozac.[5]

A study published in Phytotherapy Research pitted Prozac against a daily turmeric regimen, and you can probably already guess what they discovered: turmeric was just as effective at managing depression, and not a single patient taking turmeric complained of side effects.[6]

The horrific effects of chemotherapy are well-known—and unfortunately, its frightening risks don’t even come with a guarantee of success. While it’s still the primary cancer treatment method (along with radiation therapy), it’s considered a barbarous practice by many health experts because of the damage it inflicts on the body’s healthy cells.

A significant number of studies demonstrate that turmeric’s cancer-fighting power is on par with chemotherapy. It combats the disease by strengthening the immune system, directly killing cancer cells (without harming healthy cells), and inhibiting the growth and spread of cancer. Chemotherapy also kills more cancer cells, and does so with less severe side effects, when combined with turmeric.