Turmeric Is Redefining How We Treat Cancer

written by Ryan
Facebook0Tweet0Pin0
You are here: Home / Featured / Turmeric Is Redefining How We Treat Cancer 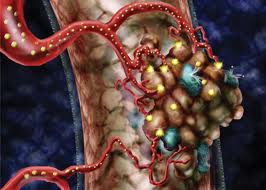 As we’ve discussed in past articles, turmeric is wowing the entire scientific community with its potent anti-cancer properties. It’s being hailed as a “universal” cancer treatment, meaning that it seems to work against nearly all types of cancer cells.

This universality was confounding to cancer researchers for some time. When other substances are used to kill cancer cells (i.e. chemotherapy drugs), different kinds of cancer cells require different cocktails of substances. Sometimes certain substances even stop working at a certain point, and doctors are forced to up patients’ doses or change the drug regimen altogether.

How is curcumin—the most popular polyphenol in turmeric—able to target cancer cells of all types?

The answer lies at the heart of a newly emerging cancer paradigm—one that turmeric has helped to shape. For decades, the “units of measurement” for understanding cancer proliferation were cancer cells and tumors (cancer cell colonies). If you can remove tumors and kill as many cancer cells as possible, researchers and mainstream oncologists thought, you can beat the cancer.

The problem with this theory, though, was that it couldn’t explain why patients experience cancer recurrence, why these recurrences can occur years later, or why they’re sometimes far more severe than the original cancer. For some time, researchers believed that all cancer cells must have inherent self-regenerating capacities. This notion supported the “cancer war mongering” of modern medicine—there’s no choice but to bombard cancer cell colonies with as much radiation and as many chemotherapy drugs as humanly possible.

But, as you probably already know, there are other choices, and they’re far safer and more effective than the barbaric forms of cancer treatment now in practice.

Uncovering the root of cancer

Researchers now understand that all cancer cells actually function in a hierarchical manner: the mass of cells that make up a tumor is “controlled” by cancer stem cells (CSC’s). CSC’s act as “mother” cells, much like the queen bee of a hive.

The regenerative ability of cancer cells is actually a function of CSC’s; and because chemotherapy and radiation have very little effect on them, they can simply regenerate any cells that have been killed off. In many cases, the CSC’s actually “learn” to regenerate cells that are stronger, faster at proliferating, and more resistant to whatever treatment was used against the initial cell colony. CSC’s often can’t even be recognized as cancer cells, which is why patients experience recurrence after years of being in the clear.

So here’s the punchline: killing Cancer Stem Cells (without harming healthy cells) seems to be the key to beating cancer. Conventional treatment methods fail on both counts—they’re almost completely ineffective against CSC’s, and they kill massive numbers of healthy cells during their futile rampage.

The blatant shortcomings of mainstream oncology is finally shifting attention to turmeric, which targets CSC’s with remarkable effectiveness, does not harm healthy cells, and supports the entire body in the process.

A recent study lays out, in glorious detail, exactly why curcumin is the arch nemesis of CSC’s: it suppresses the regenerating abilities of CSC’s by targeting over twelve different pathways (think of it as interrupting communication between CSC’s and cancer cell colonies by blocking various travel routes), directly kills cancer cells while leaving non-cancerous cells unharmed, and suppresses the ability of CSC’s to control tumor growth by literally switching off the genes that allow for it. [1]

So why isn’t turmeric a mainstream cancer treatment?

It is one of the great medical travesties of our day that, despite overwhelming evidence demonstrating the efficacy of turmeric and other natural substances, the vast majority of those suffering from cancer are never given any information about alternatives to chemotherapy and radiation therapy. While turmeric is used in rare cases as a chemopreventive agent—that is, a substance that decreases the side effects caused by chemotherapy while increasing its efficacy—it’s still not used by mainstream oncologists as an active treatment for cancer.

For years, the medical establishment claimed that there was insufficient study data to support turmeric’s use as an anti-cancer agent. Those days are long gone, though—there’s now a mountain of available data, and one recent study even clearly demonstrated that curcumin is more effective at killing cancer cells on its own than when combined with chemotherapy. [2]

Unsurprisingly, that finding was buried beneath the rest of the study’s data, which instead supports curcumin’s safe use in conjunction with approved chemotherapy drugs. After all, researchers who stray too far from the interests of pharmaceutical companies soon find that their funding has dried up.

Anti-cancer diets and lifestyle-oriented treatment strategies have existed in the natural health community for a long time (thousands of years, if you count Ayurveda and other ancient systems of medicine, all of which had effective, natural treatments for cancer). The main reason that curcumin is suddenly so interesting to the mainstream medical industry is not even its incredible efficacy, but rather the way in which it fits the allopathic strategy of battling diseases with specific functional substances.

A couple of pharmaceutical companies even tried to patent turmeric at one point, but had their requests denied by the U.S. Patent and Trademark Office. At the moment, Big Pharma is feverishly working to develop their own synthethic, patentable version of curcumin. They haven’t succeeded yet, but you can bet that their hopes of doing so play a huge role in their allowance of pro-turmeric research.

Regardless, the new paradigm of cancer treatment that turmeric is helping to forge is a great leap forward. However things pan out for pharmaceutical companies, turmeric will remain an accessible and affordable tool for taking cancer treatment into your own hands. And with any luck, it will soon be presented as a valid treatment alternative for the millions of people suffering from cancer.