Horseradish: A Natural Solution for Pain and Disease

written by Ryan Greendyk
Facebook0Tweet0Pin0
You are here: Home / Body / Horseradish: A Natural Solution for Pain and Disease 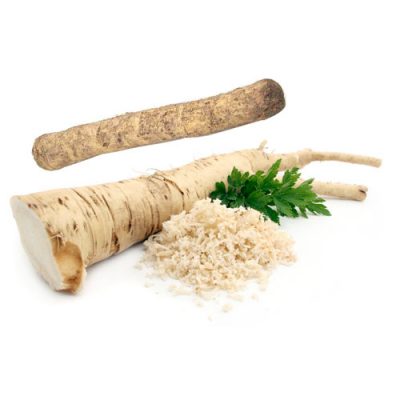 It’s becoming increasingly obvious just how healing food can be.

Nutrition still plays a woefully tiny role in mainstream medicine, but doctors can no longer ignore its primary importance. All the evidence points to one simple conclusion: poor diet and lifestyle choices lead to sickness, and the solution is to make better choices, not to carry on as usual and suppress the symptoms of disease with risky drugs and interventions.

Practitioners of ancient and traditional systems of medicine have known for millennia that food is medicine—now modern medical research is finally catching up with folk wisdom. The result is a veritable renaissance of comprehensive research on “functional foods,” namely foods that can be used therapeutically to treat an acute disease or condition.

Such work is revealing that many simple spices and everyday foods are actually tremendously powerful medicines, especially when used in conjunction with a clean, balanced, nutrient-dense diet.

One such food is horseradish, a root vegetable in the Brassicaceae family of cruciferous vegetables. This plant family is well-known for its profound health benefits—it contains popular health foods like broccoli and kale, as well as cabbage and mustard.

Horseradish hasn’t been as much of a hit in the superfood community, though—possibly because of its intensely spicy flavor, which makes it a much less versatile cooking ingredient.

But make no mistake: this little root may be even more beneficial than its popular cousins. For example, it contains ten times more glucosinolates than broccoli (these compounds are potent antioxidants). For this reason, researchers believe that horseradish holds great promise as an anti-cancer functional food.[1]

And that’s just the tip of the iceberg. Here’s some of the health benefits that horseradish has to offer.

Immune support. Horseradish contains a wealth of beneficial phytonutrients, including isothiocyanates and sinigrin (powerful antioxidants that keep your system clear of toxins, scavenge free radicals, and even fight cancer),[2] as well as vitamin C (a well-known immune booster).

These antioxidants have even been shown to protect against mutagens, which can permanently damage the body and lead to many degenerative conditions.[3] Lastly, horseradish enhances the disease-fighting capacity of phagocytes, which are one of your immune system’s major lines of defense.[4]

Antibiotic activity. Allyl isothiocyanate, the oil largely responsible for horseradish’s intense flavor, is also a potent antimicrobial agent. It’s been shown to restrict the growth of bacteria when added to meat,[5] and it’s an effective treatment for urinary tract infections,[6] bronchitis, sinusitis, and other respiratory infections, and the common cold.[7] It’s even been proven effective against virulent microbes like Listeria, E. Coli, and Staphylococcus.

Horseradish is so potent that just smelling it can help clear the sinuses and bronchial passages of mucus, which helps prevent infection.

Digestion support. Horseradish is also packed with beneficial enzymes that keep digestion and elimination working optimally. These enzymes regulate bowel movements and stimulate digestion by facilitating the creation of bile in the gallbladder (and by stimulating various other salivary, gastric, and intestinal glands).[8]

Pain relief. The glucosinolates in horseradish are powerfully anti-inflammatory (predominantly because of their antioxidant activity, which cools inflammation by neutralizing free radicals).[9] For this reason, it’s been used for thousands of years to address aches and pains, and can be used to treat arthritis and chronic pain.

Researchers also believe that the hormetic stress response induced by the “heat” of horseradish may also explain why it’s able to quell inflammation (topical application of capsaicin works by a similar mechanism).

Cancer prevention. As mentioned above, horseradish is making big waves in the oncology research world. Studies have shown that many of the beneficial components in horseradish (especially its glucosinolates) help make the body more resistant to the development of cancer,[10] induce apoptosis (cell death) in cancer cells,[11] and mitigate the negative effects of chemotherapy.

How to use horseradish safely and effectively

Horseradish is commonly consumed as a raw food or condiment (the fresher the better). It’s definitely an acquired taste, but just think of all the benefits you’ll enjoy! Most wasabi in the United States is actually made with horseradish (as opposed to real wasabi plant, Wasabia Japonica, which is difficult to find outside of Japan)—so if you enjoy wasabi on your sushi, you’re probably already acquainted with the taste of horseradish.

As always, find the ways of integrating it into your diet that work best for you. Grate it into smoothies and soups, add it to fresh juices, use it as a garnish or sauce ingredient, or blend it with beet juice to make an exceptionally energizing and detoxifying elixir.

Horseradish is generally very safe, but it’s best avoided if you’re pregnant, have kidney problems, or have hypothyroidism.