written by Ryan Greendyk
Facebook0Tweet0Pin0
You are here: Home / Body / 4 Reasons You Should Add Cinnamon to Your Diet (and the RIGHT kind) 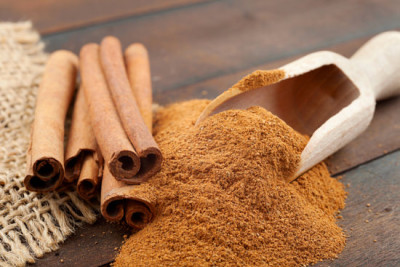 Cinnamon is one of the world’s oldest and most popular spices, and for good reason. Despite its far-flung origins, it’s become part of the Western world’s mainstream spice repertoire.

Its sweet, alluring scent and taste secured it a prominent place in the spice trade of the ancient world. Various civilizations discovered a number of powerfully medicinal uses for it too, and included it in their herbal pharmacopeias.

The ancient Egyptians used it as an embalming agent for pharaohs and other prominent members of society, and Ayurvedic practitioners in India include (and continue to include) it as a substance of primary importance in their highly sophisticated healing system. The Romans even used it as currency.

For these reasons and more, cinnamon was once more valuable than gold.

Luckily, cinnamon is available nowadays at a much more reasonable price…and it certainly hasn’t gotten any less healing over the years.

Modern medicine is finally starting to rediscover the many health benefits of cinnamon, thanks to society’s renewed interest in the healing power of food.

Here’s the catch, though: not all cinnamon is created equal, and you need to seek out a certain kind in order to take advantage of its beneficial properties.

We’ll talk about the different kinds of cinnamon at the end of this article. First, let’s dive in to some of this prized spice’s time-tested healing properties.

A powerful antioxidant and natural anti-inflammatory

For starters, cinnamon is packed with a number of compounds—like cinnamaldehyde, which is responsible for its rich aroma and flavor—that have strong antioxidant effects in the body.[1]

As we’ve discussed in other articles, protecting the body from oxidative damage caused by free radicals is absolutely essential in today’s toxic and stressful world.  Doing so ensures that your immune system, detoxification mechanisms, and cellular metabolism function much more efficiently—which means more energy, less frequent illness, and greater longevity.

Cinnamon outshines tons of other antioxidant-rich foods—even immune-boosting powerhouses like garlic and oregano, and nearly every other spice (with the exception of turmeric).

Many of the polyphenol antioxidants that cinnamon contains are also potently anti-inflammatory.[2] This one-two punch relieves aches and pains, strengthens the immune system, and lowers the risk disease (many health experts maintain that inflammation is the root of all illness).

These antioxidant and anti-inflammatory properties work wonders for preventing illness and disease.

Not only can cinnamon stave off colds and other infections, but a number of studies have even shown it to be effective in the prevention of various cancers[3] and neurodegenerative diseases like Alzheimer’s[4] and Parkinson’s.[5]

Preliminary research even suggests that cinnamon helps fight the HIV virus (out of 69 promising medicinal plants, it was proclaimed to be the most effective of all).[6]

Help out your heart and your pancreas

This is partially due to its anti-inflammatory activity, but its work extends even deeper too. The studies found that 1 gram of cinnamon per day lowered LDL cholesterol (the “bad” kind) and triglycerides, increased HDL (the “good” kind), and reduced blood pressure.[7]

These effects can also be tremendously beneficial for diabetics, who are at much higher risk for developing heart disease.

Good for Your Blood Sugar

In fact, cinnamon is an all-around fantastic ally for diabetics: at slightly higher daily doses (2-6 grams per day), cinnamon can even increase insulin sensitivity and reduce fasting blood sugar levels by up to 29%.[8] It accomplishes this feat by reducing the amount of glucose that is released into the bloodstream and by slowing the breakdown of carbohydrates in the digestive tract.

So no matter what your health needs and priorities are, it’s worth it to incorporate this delicious and versatile spice into our daily routine.

Just make sure to use the RIGHT kind of cinnamon

Now back to that “catch” I mentioned earlier.

There’s actually two main types of cinnamon. One is known as Ceylon cinnamon (or “true cinnamon”). This is the good stuff—the treasured spice that will provide you with all the benefits discussed above.

The other type is Cassia cinnamon (which is sometimes crudely referred to as “bastard cinnamon”). Despite its unseemly nickname, this is the type of cinnamon that is most commonly found in stores.

It lacks many of the healing properties of Ceylon cinnamon, and actually contains a compound called coumarin, which can act as a dangerous blood thinner in higher doses (for this reason, cinnamon is contraindicated for people taking blood thinners, but this danger doesn’t exist with “true” cinnamon).

Cassia cinnamon will undoubtedly continue to be the more widely available variety, because it’s cheaper and more easily sourced. So if you want to reap all the benefits that cinnamon can provide, always seek out Ceylon cinnamon.

Ceylon cinnamon’s flavor is wonderfully refined and sophisticated, so you certainly won’t be sacrificing any enjoyment. It will remind you that cinnamon is not only one of the world’s healthiest spices, but also one of the most delicious.