written by Ryan Greendyk
Facebook0Tweet0Pin0
You are here: Home / Body / This Flu Season Is a Rough One (Here’s How to Protect Yourself) 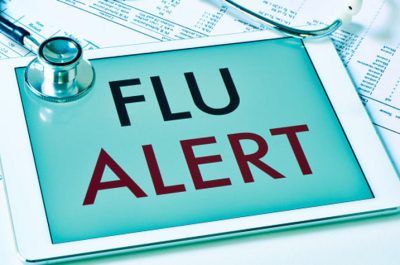 You’ve most likely had the unfortunate experience of finding out just how awful the flu can be. This year’s flu season in the United States is already one of the worst on record—new strains of the influenza virus have sprawled across 46 states and claimed the lives of 106 people—and health agencies fear that it will get even worse.

For example, the number of Californians under 65 who’ve died of the flu has jumped to 42, compared with nine at the same time last year, state officials said Friday.

The flu season, which runs from October through May, typically peaks in February. Public health officials say they don’t yet know whether the flu season is peaking earlier than normal, or if this year will be a particularly tough one for the flu.

“We are still early in the season but … the number of deaths so far is significantly higher than at the same time in the previous several influenza seasons,” said Dr. James Watt, chief of the division of communicable disease control with the California Department of Public Health, in a press call with reporters this week.

Thousands of people in California started showing up at doctors’ offices and hospitals in December with the flu. Since then, emergency rooms have been crowded with long wait times, and patients have struggled to get doctor appointments as well as flu medications.

Most people in California and nationwide are catching a strain of influenza A known as H3N2, which tends to be deadlier than other strains. H3N2 was to blame for Australia’s most recent, brutal flu season, which led to record numbers of sick people as well as the nickname “Aussie flu.”

Remember the H1N1 “epidemic” of 2009 that had everyone shaking in their boots? In a perspective article published in the New England Journal of Medicine, researchers reported that during the current flu season, Australia reported nearly five times the number of laboratory-confirmed influenza notifications compared to the 2009 H1N1 outbreak.[1]

It’s certainly not a pretty picture, but there are still plenty of measures you can take to prevent the onset and spread of this nasty bug.

How to protect yourself during this (and every) flu season

First and foremost, remember that prevention is the best treatment. The influenza virus is extraordinarily skilled at replicating and spreading to new hosts, but you can avoid catching it if your body is in a proper state of balance (even if you’re living with someone who is already ill from it). Try not to think of the flu as a bug to be avoided (because it’s everywhere), and instead focus on optimizing your body’s ability to keep it at bay.

Here are some principles and practices to get you started.

Proper sleep. Let’s start with the obvious: your body heals and recharges while you’re asleep, so if you’re not getting enough optimal sleep, you simply can’t expect your immune system to work properly. While many people have their own opinions about how many hours of sleep are needed to maintain optimal health, scientific data on the subject is fairly conclusive.

As we reported in a past article, researchers at the Center for Human Sleep Science at the University of California, Berkeley define “sleep deprivation” as anything less than seven hours of sleep per night.

Chronically getting less than seven hours of sleep per night (especially for extended periods of time) has been correlated with decreased cognitive performance, cognitive decline, increased degenerative disease risk, and more.[2]

It should come as no surprise, then, that sleep deprivation dramatically increases the chances of contracting influenza. Proper sleep hygiene is always important, but it deserves particular attention during flu season.

Proper diet. The same goes for maintaining an antioxidant-rich, nutrient-dense diet. If the body is not fueled with the nutrients it needs to thrive, it will have a difficult time resisting infection with the flu virus and other pathogens. Eat plenty of leafy greens, organic fruits and veggies of all colors, whole grains, raw nuts, and healthy fats and proteins.

Avoid junk foods and snacks, processed and packaged foods, refined sugar, and simple carbohydrates, all of which will lead to systemic inflammation (which diverts the immune system’s much-needed attention away from preventing and fighting the flu.

Avoid nutrient deficiencies, which also create “points of weakness” that make the body more susceptible to infection. Studies have found that optimal levels of vitamin D are especially important, and that vitamin D supplementation can offer dramatic protection against the onset and spread of influenza.[3]

Think twice about the flu shot. You probably noticed that we haven’t yet mentioned anything about getting a flu shot as a preventative measure. Here’s why: based on data on Australia’s recent flu season, health agencies are worried that this year’s flu vaccine will be less than 10% effective.[4]

Flu shots have other potential risks and downsides too, but regardless of your perspective, this low-percentage efficacy should make it clear that you cannot rely solely on the flu shot to prevent the onset of the flu (as much as vaccine manufacturers would love for this to be the case).

Try natural flu remedies. While using the lifestyle practices above to prevent the flu in the first place is always your best bet, there are also plenty of natural remedies that have a time-tested track record for fighting the flu.

Elderberry has been shown to decrease the duration of influenza A and B by four days or more.[5]

The data behind high-dose vitamin C is even more impressive: hourly administration of 1,000mg attenuated symptoms by 85%, and completely prevented the spread of symptoms to a healthy control group.[6]

Manuka honey, which we’ve already praised highly in past articles, has also been shown to exhibit potent anti-viral properties against all known strains of the flu.[7]