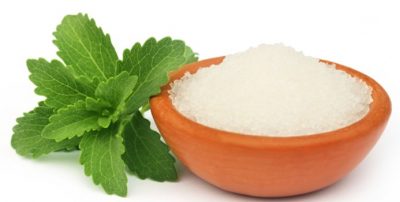 By now, you’re probably well aware of the dangers of conventional, processed sugar. Besides being a primary contributor to obesity and weight gain, sugar is completely devoid of beneficial nutrients, and can actually deplete the body of other critical nutrients like magnesium, vitamin D, calcium, and vitamin C.

The natural sugars in fruits and other foods are a whole different story. Sugary whole foods are not what you need to worry about, as long as you consume them alongside a healthy balance of vegetables, clean protein sources, healthy fats, whole grains, seeds, and legumes.

As a general rule, it’s best to avoid all forms of added sugar or sweetener. Luckily, though, there are two notable exceptions to this rule—they not only circumvent many of the issues with processed sugar, but also offer loads of other health benefits.

The first is honey, the virtues of which we’ve discussed at length in previous articles. You’ve probably heard of the second one too: stevia.

Stevia is a South American plant related to marigolds and chrysanthemums. There are over 200 different varieties, but the one used to make the commonly available sweetener is called Stevia rebaudiana. The plant contains two glycosides that are responsible for its sweetness: stevioside and rebaudioside.

These compounds pack some serious sweetness—between 30 to 200 times that of conventional processed sugar, depending on the form used (more on that below).

Even if stevia was nothing more than a safe alternative to sugar, it would still be worth recommending—but research demonstrates that it also works to heal a number of health conditions (many of same ones that sugar consumption causes). Here are some prominent examples.

Lyme disease. One of stevia’s most fascinating therapeutic applications was only discovered in recent years. Researchers at the University of New Haven compared stevia leaf to the three leading antibiotics for Lyme disease treatment—it was as effective or more so than all the antibiotics, and it carried none of the side effects commonly associated with Lyme antibiotic regimens.[5]

Diabetes. Replacing sugar with stevia works wonders for preventing and healing diabetes, simply because sugar consumption is a primary risk factor for the metabolic dysfunctions that lead to diabetes. But one study also demonstrated that stevia can actively heal diabetes by dramatically lowering fasting blood sugar levels and balancing insulin sensitivity.[7]

Cancer. In 2012, a prominent study published in Nutrition and Cancer demonstrated that stevioside enhances apoptosis (the process by which cancer cells destroy themselves) and decreases numerous stress markers that contribute to the growth and spread of cancer.[8]

Must-follow practices for safe and effective usage of stevia

If you’ve already done a good amount of research into stevia, you may have heard that its consumption can carry side effects. Specifically, a 1999 study suggested that stevia decreases the fertility of male rats.[9] This may sound like cause for alarm, but it’s not the full story by a long shot.

First and foremost, subsequent research failed to confirm any connection to decreased fertility. Further, the mechanism blamed for this effect—namely that the glycosides in stevia are chemically similar to hormones that could affect fertility—is a property of many other plants, none of which have ever been shown to affect fertility adversely.

Most importantly, only one type of stevia product has any likelihood of causing side effects. As with most products, not all stevia is created equal. Raw green-leaf stevia is the least processed form; because it’s not altered from its natural form, it contains both stevioside and rebaudioside.

When companies create stevia extracts, they usually isolate rebaudioside, which tastes sweeter but lacks most of the benefits of stevioside.

Highly processed forms of stevia, like the popular brand Truvia, are even worse. They not only don’t contain stevioside, but also are made with carcinogenic solvents, and often contain no more than 1% actual stevia!

Many people find raw stevia to have a bitter aftertaste, because it contains stevioside. If you’re going to use stevia as a sweetener, though, it’s critical that you use this unprocessed form, as side effects have only been linked to highly processed products containing only rebaudioside.

If you’re using stevia therapeutically to prevent or treat illness, it’s even more important that you use a product that contains stevioside. Most of the studies cited above used a liquid alcohol extract, which ensures a full-spectrum extraction of glycosides and concentrates the strength of these beneficial compounds.