Pomegranate: An Ancient and Healthful Superfood 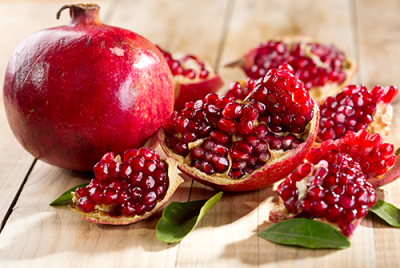 These days, it’s hard to keep track of all the “latest and greatest” miracle foods. As the knowledge base of the natural health world exponentially expands, it’s becoming increasingly clear that we live in a world that is abundantly rich in wildly healthful edibles.

More and more people are turning from the questionable integrity of laboratory-created frankenfoods back to the original goodies that Mother Nature has offered all along.

Smart choice—after all, nature has had a lot more practice creating foods that are good for both us and the planet.

And there’s certainly no shortage of goodies. The number of health-packed foods that are available to us is so staggering that the modern health seeker risks information overload when trying to sift through them all.

But here’s one health powerhouse of which you’ve undoubtedly heard: the ancient and illustrious pomegranate.

The pomegranate is one of the world’s oldest known fruits, and is prominently featured in the healing modalities, mythologies, and religions of the ancient world.

They symbolized prosperity, fruitfulness, abundance, and ambition for cultures and groups as varied as that of the Egyptians, Israelites, Muslims, Chinese, and Indians. Perhaps this was why their image was used on some ancient Greek coins.

I haven’t even begun listing all the pomegranate’s physiological benefits… but even so, doesn’t consuming a food so closely associated with overflowing abundance and good fortune just seem like a good idea?

And it gets better.

The Egyptians and ancient Indian practitioners of Ayurveda used pomegranates as a powerful healing tool for infections, a tonic for the heart and throat, and a tonifying and strengthening agent for the skin and blood.

Modern medicine has confirmed all of these healing properties that the ancients intuitively discerned—and it’s uncovered many more of the pomegranate’s tricks too.

Let’s take a look at a few of the characteristics that make them so amazing. You should probably consider becoming better friends with pomegranates if…

…you value longevity and overall wellness

One of the things that makes pomegranates such healthful allies is their incredible antioxidant profile. Pomegranate is a king among antioxidant-rich fruits. It even has a “crown” (which is the name given to the protruding blossom at one of its ends).

All puns aside, the statistics behind the pomegranate’s antioxidant powers are pretty impressive.

In fact, a 2008 study found that pomegranate juice outshined the polyphenol potency of nine other healthful beverages (and by a large margin of 20%).[1] Grapes, blueberries, and acai (all of which are known to be potent sources of antioxidants) fell short.

This antioxidant activity comes particularly from the pomegranate’s high levels of compounds known as punicalagins and punicalins, as well as its vitamin C content.

And these essential micronutrients can do some amazing things. They help your body’s cells protect themselves from attack, which translates to fewer illnesses, slower aging, and greater vitality.

The natural compounds contained in pomegranates are also excellent for your heart health. Studies have found that punicalagin in particular can lower systolic blood pressure, slow (and even reverse) plaque formation in arteries, and clear heart blockages caused by atherosclerosis. [3]

One study even demonstrated that drinking an ounce of pomegranate juice each day for a year decreased atherosclerotic plaque by 30% (while participants who didn’t drink their juice experienced a 9% increase). [4]

Lastly, these same potent antioxidants were found to reduce platelet aggregation, a process of blood cell clumping that can increase the risk of heart attack and stroke. [5]

…you’d like to improve your memory and cognitive function

As mentioned above, pomegranates are excellent anti-aging tools. Their healing and tonifying qualities even extend to the brain—the rapid (and seemingly inevitable) decline of which is nearly always linked directly to the aging process.

Nevertheless, people who consume pomegranates daily are found to perform better on memory tests (when measured against a placebo), and their brains show increased activity when analyzed by an fMRI. [6]

Some of the phytochemicals in pomegranates also stimulate serotonin and estrogen receptors, [7] which help balance and regulate the emotional aspect of cognitive health by ameliorating the symptoms of depression and related conditions.

…you suffer from pain or other afflictions of inflammation

Antioxidants are excellent for reducing inflammation. This means that pomegranates are capable of delivering benefits you can really feel, because they can alleviate the pain caused by inflammation and other symptoms of arthritis.

One study found that, by reducing inflammation and targeting the enzyme that destroys cartilage in those with arthritis, pomegranate extract saves cartilage and reduces overall stiffness and pain. [8]

Integrating pomegranates into your diet

As you can see, there’s all sorts of good reasons why you should have more pomegranate in your life.

Though many of the studies cited above involved pomegranate juice, you can get the same benefits from whole fruit or pomegranate extract. In both cases, you’ll avoid the excess sugar (unbound by fiber) that comes along with pomegranate juice (and all fruit juices, for that matter). Pomegranates seeds (called arils) are delicious in cereals, salads, smoothies, or all by themselves.

And don’t be scared away by their tough skin and strange structure…figuring out a routine for preparing them is well worth it. Sure, you can’t just bite into them like an apple, but eating them still isn’t as difficult as you’d think.

Besides, it’s rather nice when food requires some creative preparation work before it yields its treasures. This process allows us to be more present and mindful when we nourish ourselves. It allows eating to be its own kind of meditation.

To prepare a pomegranate, simply cut off the crown (without piercing the seeds within), score the fruit’s skin into quarters, soak it in water for 5 minutes, and then separate the seed bunch from the skin with your fingers. Some people also like to cut pomegranates in half and separate the seed by pounding on the back of each half with a large spoon.

If that still sounds too complicated, check out this this nifty pomegranate deseeder tool. You know a fruit has some clout when there’s a preparation tool custom-made for it!

Whatever you do, just be sure you take advantage of how delicious medicine can be when it comes in form of healing foods like pomegranates.