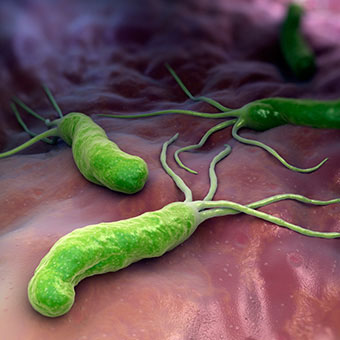 It’s estimated that up to 70 million Americans suffer from digestive diseases. A full 25 million will experience a gastic ulcer at some point in their lives, and over 60 million (that’s 20% of the entire U.S. population) experiences acid reflux symptoms at least once weekly.[1]

And the worst part? The incidence of chronic digestive disorders is still rising sharply, especially in the United States.

We shouldn’t really be surprised. The Standard American Diet is a poor excuse for actual nutrition—its meat, sugar, and processed foods inevitably lead to inflammation, oxidative stress, and digestive imbalance. After all, the stomach is the front line of your body’s battle against toxic and unhealthy food.

To make matters worse, our core treatment modalities for digestive issues are woefully inadequate and short-sighted. Rather than seek out the root causes of stomach issues, we employ drugs that temporarily mask symptoms (and ultimately make the condition worse in the long-run).

Take common antacids also known as proton pump inhibitors (PPIs), for example. These dangerous drugs, which are now available everywhere as over-the-counter medications, are our primary treatment for conditions ranging from heartburn (acid reflux and GERD) to stomach ulcers.

Doctors continue to use them despite a growing awareness that lowering the stomach’s acid content actually worsens and perpetuates the underlying condition.

One editorial in the journal Gastroenterology literally claimed that “proton-pump inhibitor therapy induces the symptoms it is used to treat,” even in healthy individuals who had never experienced acid reflux prior to taking the medication![2]

Steer clear of antacids like Nexium, Prilosec, and Prevacid… these medications have been conclusively linked to both Alzheimer’s disease and liver dysfunction

And in case you still need more reasons to steer clear of PPIs like Nexium, Prilosec, and Prevacid, know that these medications have been conclusively linked to both Alzheimer’s disease and liver dysfunction.

While optimal diet and lifestyle modification should always be your first course of action, we also need to seek out remedies that safely attack the root causes of digestive issues. New research suggests that vitamin C may be just the supplement for the job.

In another article, we outlined vitamin C’s exceptional antibacterial qualities. According to one hospital physician, it’s so powerful that it outperforms our strongest antibiotics, and decreases the mortality rate of septic infection from 50% to 1%.[3]

So what does this have to do with digestive issues?

Quite a bit, because it turns out that bacteria are a root cause behind at least some of the digestive disorders plaguing us today. In particular, researchers have been studying the Helicobacter pylori bacterium (H. pylori), which is linked to gastric ulcers and heartburn.

H. pylori is a hugely prevalent bacterium—it’s estimated that 50% of the entire world’s population is infected with it.[4] It is easily passed like any other germ, but it usually doesn’t take hold unless a person’s gut flora and stomach acidity are already imbalanced. You’re particularly at risk if you eat inflammatory foods, take NSAIDs like ibuprofen, or take PPIs.

You read that right: proton-pump inhibitors increase the risk of H. pylori infection. Nevertheless, PPIs are the primary treatment (along with antibiotics) for gastric ulcers—just like with GERD, they worsen the very condition they’re used to treat.

Luckily, when vitamin C is added into the mix, the results are dramatically improved. The eradication rate of H. pylori that occurs with antibiotics and PPIs is only 60% (a figure considered insufficient by gastrointestinal specialists), while adding 1,000 mg of vitamin C and 800 IU of vitamin E to the regimen yielded an eradication rate of 91%. Further studies have demonstrated that vitamin C helps clear persistent H. pylori infection even in the absence of antibiotics and other pharmaceuticals.[5]

Maximize the benefits of vitamin C

Vitamins in general have gotten a bad rap—mainstream media outlets have attacked them as nothing more than ineffectual marketing gimmicks. Nevertheless, research has clearly demonstrated that vitamin C can be a powerful ally to your health, as long as you follow a couple rules for maximizing its benefits.

First, steer clear of multivitamins and synthetic vitamin C capsules packed with additives and artificial flavors. These products are largely a waste of money, because hardly any ascorbic acid is absorbed when you take them.

Instead, seek out a high-potency formulation that is nanoencapsulated for optimal bioavailability. Choose l-ascorbic acid, which is a fermented form of ascorbic acid that mimics the form of vitamin C that naturally occurs in plants (and in the bodies of mammals that produce the nutrient endogenously).

If you’re looking for an exemplary vitamin C that checks all these boxes, we highly recommend PuraTHRIVE Liposomal Vitamin C.  Using high-grade l-ascorbic acid, and their patented micelle liposomal encapsulation increases absorption by up to 140 times. It’s by far the most powerful (and delicious) vitamin C product on the market.