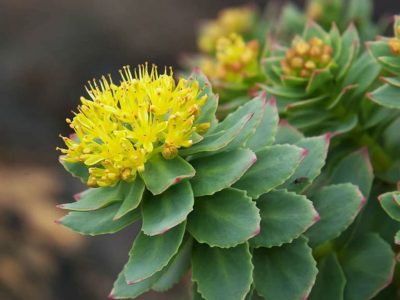 Adaptogenic plants and herbs have been used medicinally for thousands of years, especially in Ayurvedic medicine and folk herbalism. They were traditionally given as tonics for longevity, vitality, and fortitude—now modern research is rediscovering them as perfect tools for supporting both overall wellness as well as acute health issues.

We gave a primer on adaptogens in a past article, and explained how they function as an ideal antidote to the constant stress of the modern world. They help the body learn stress resistance, the process of coping with environmental stressors in a sustainable and optimized way. This translates into a strengthened immune system, balanced hormones, enhanced performance, and increased disease resistance.

In other articles, we’ve provided more in-depth overviews of several of the top adaptogens, like ashwagandha, turmeric, cordyceps mushroom, maca, and tulsi (which is also known as Holy Basil). Another fascinating adaptogen that deserves the spotlight is rhodiola rosea (it’s usually referred to simply as rhodiola).

Rhodiola: A natural performance enhancer, antidepressant, and so much more

Rhodiola, a perennial herb also referred to as golden root, arctic root, and rose root, is an adaptogen par excellence. Like other prominent plants in its class, it continues to impress researchers with the versatility of its benefits and therapeutic applications.

Perfect immune modulation. Rhodiola is incredibly effective for immunomodulation—this means that it works to balance immune function, whether it’s underactive or overactive. Research suggests that this property makes rhodiola a promising treatment for a variety of health conditions, including autoimmune disorders, cancer, and more.[1]

Improved sexual and reproductive health. Folk usage and modern rhodiola research both suggest that rhodiola can balance hormone levels (once again, boosting or lowering depending on what is needed) and can help with infertility, libido, erectile dysfunction, and more. Unlike many herbs and remedies for addressing sexual health concerns, it has been shown to be equally safe and beneficial for both men and women.[2]

Relief from anxiety and depression. Rhodiola really began to garner attention in research circles when studies uncovered its profound antidepressant and anti-anxiety properties. Randomized, double-blind, placebo-controlled trials have demonstrated that 340-1,360mg daily afforded “significant improvements” in symptoms of depression[3] and anxiety,[4] that its efficacy could be favorably compared to that of pharmaceuticals, and that the benefits offered come without any side effects.

Endocrine support. Endocrine imbalance caused by continual environmental stress can lead to all sorts of serious health problems, including chronic fatigue syndrome and “burnout.” Researchers have demonstrated that, after taking 400mg of rhodiola per day for 12 weeks, 83% of study participants reported a dramatic improvement in the symptoms and impairments of chronic fatigue or burnout syndrome.[5]

Enhanced athletic performance. Rhodiola has been used for centuries as a tried and true vitality elixir. Studies have confirmed that it improves numerous markers for athletic performance, including inflammatory biomarkers, time to exhaustion during exercise, C-reactive protein levels, heart rate, endurance, blood lactate levels, recovery time, and markers of neuromotor fitness.[6] And whether or not you’re a die-hard athlete, rhodiola has also been shown to prevent stress-induced cardiac damage and to improve overall markers of cardiovascular health.[7]

Antiviral effects. In case you still need more incentive to try out this incredible herb, rhodiola also exhibits potent antiviral properties. It’s particularly good at building innate immunity and protecting against infection with influenza, respiratory infections, and other common viral ailments. One study even demonstrated that it prevented infection and stopped viral replication in marathon runners, who are especially susceptible to viral infection about prolonged exertion.[8]

While rhodiola may still be underutilized, it has become popular enough that it’s fairly easy to source. Well-stocked grocery stores, health food stores, and herb supply shops will all very likely have some on hand, and there are plenty of reputable online sources, as well.

Working with 10:1 concentrations of rhodiola can amplify and accelerate its effects, but loose herb capsules (which is what you’ll find in most stores) are powerful and effective enough for most applications.

Note that some people find rhodiola to be quite stimulating (though it’s not a stimulant in the traditional sense), so don’t take it in the evening unless you’re sure it doesn’t have this effect on you.

When working with rhodiola or any other adaptogen, it’s often helpful to “cycle” your doses—namely, take it every day for a certain length of time, and then take a break for that same length of time (most people choose one or two weeks). This process helps keep rhodiola acutely effective in the long-term, and gives your body time to integrate in between cycles.