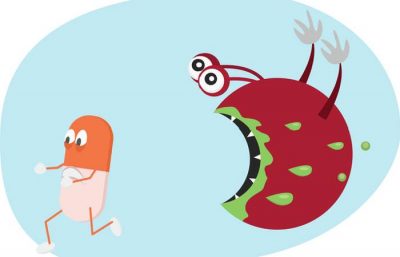 Antibiotic resistance is one of most serious health crises of our time. The World Health Organization reports that “a post-antibiotic era—in which common infections and minor injuries can kill—far from being an apocalyptic fantasy, is instead a very real possibility for the 21st century.”[1]

Even mainstream health agencies like the Center for Disease Control and leading researchers are using words like “nightmare” and “apocalypse” to describe the impending uselessness of conventional antibiotics. Meanwhile, business presses on as usual, with astoundingly little being done to prevent or slow the onset of complete antibiotic resistance.

We’ve written before about some of the biggest culprits.

Overprescription of antibiotics by doctors is an obvious problem (though, on the bright side, Blue Cross Blue Shield reports that the prescription rate has dropped 9% in the United States this year).[2]

Antibacterial soaps are a less conspicuous (and possibly even more worrisome) source of antibiotic resistance. We’re exposed to them nearly every day—unless we take precautions to avoid them. Even conventional dairy products and meat are often contaminated with antibiotics (and all sorts of other toxins too).

But did you know that dentistry is also to blame for the rise of antibiotic-resistant superbugs?

We tend to think that antibiotics are only used and prescribed by hospital physicians and medical doctors, but dentists make a significant contribution to the total too—it’s estimated that they write over 24.5 million prescriptions every year. And unlike the prescription rate among medical doctors, the use of antibiotics in dentistry is increasing.[3]

Now a number of health agencies are investigating the connection between dental antibiotic usage and a new, potentially deadly infection called Clostridium difficile. Over the last six years, the Minnesota Department of Health (MDH) has discovered that at least 15% of those infected with C. diff were prescribed antibiotics by dentists (57% had received an antibiotic prescription from either a dentist or a doctor).[4]

The investigation has revealed some worrying facts about antibiotic usage by dentists. For starters, a full one third of C. diff patients who were given antibiotics by dentists had medical records that did not mention the prescriptions. This is not only careless recordkeeping, but is also in clear violation of American Dental Association (ADA) guidelines.

This is a key point. If it seems like dentists are being scolded unfairly (after all, doctors still prescribe vastly more antibiotics than dentists), remember that dental procedures very rarely require antibiotics. A tooth abscess often requires antibiotic treatment, but the practice is otherwise gratuitous. The takeaway, then, is that dentistry is one field in need of drastic improvement when it comes to preventing antibiotic resistance.

While there are certainly many factors contributing to antibiotic resistance, experts believe that this unscrupulous use of antibiotics by dentists is at least partially to blame for the spread of the C. diff infection, which affected a half million people just in a single year, and is now the most common microbial cause of healthcare-associated infections in U.S. hospitals.[5]

What you can do

Here’s the good news about antibiotic resistance: there are still many natural remedies that serve as effective antibiotics, and they work far more harmoniously with your body anyway.

While natural antibiotic alternatives are still very powerful and should be used with care, the chance of them causing any of these issues is drastically lower (especially if only taken for the same amount of time during which you’d take a traditional antibiotic—problems only arise when people take naturally antibiotic herbs and supplements for weeks or even months at a time).

We’ve covered some of our favorite antibiotic alternatives in past articles, including lavender essential oil (which kills even MRSA and other antibiotic-resistance bacteria), garlic (which targets both bacteria and viruses with stunning effectiveness, without damaging the gut in any way), vitamin C (which is so powerful that it’s being used to treat septic infections in hospitals), olive leaf (which fights not only superbugs but also viruses and fungi), colloidal silver, turmeric (which just might be one of the world’s most healing and versatile plants), oregano, black cumin seed, and ginger.

By using these “natural antibiotics” in lieu of prescriptions whenever possible, you’ll be protecting both yourself and the rest of our society from encroaching antibiotic resistance.

[1] Natural Alerts, The Antibiotic Epidemic: How To Fight Back Superbugs And Emerging Bacteria With Miracles From Mother Earth, p. 4.