Garlic: More Effective than Drugs (and does not destroy your gut)

written by Ryan
Facebook0Tweet0Pin0
You are here: Home / Body / Garlic: More Effective than Drugs (and does not destroy your gut) 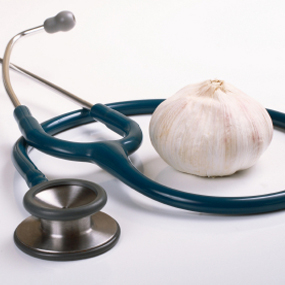 In ancient times, many spices were worth more than gold. Surely their vibrant colors and alluring aromas played a part in making them so desired, but the ancients primarily valued spices because they understood their deep and versatile therapeutic potential.

A plant that could cure, as if by magic, any number of varied maladies, while also providing the sustenance needed by the body, was rightly seen as a treasured ally.

Only recently, as more and more people have begun to lose faith in Western medicine’s monopoly on healing, has our culture returned to this herbal pharmacopoeia with a more open mind. Studies have revealed that many spices—such as turmeric, oregano, black cumin, saffron, cloves, and ginger, just to name a few—are remarkable, intelligent healing agents.

Another “superspice” that has flown under the radar for too long is garlic. This bulb is so common that it’s come to be thought of as just another flavoring ingredient (albeit a very pungent one). But as hard as it might be to believe, garlic’s healing power is as potent as its aroma. Over four thousand studies now testify to the fact that garlic is a functional food of the highest order—that is, a food that has been scientifically proven to confer condition-specific benefits.

Researchers investigating the virtues of garlic obviously already had some idea of what they’d find; after all, studies are designed to test preconceived hypotheses. But even they were surprised by some of their results.

In an attempt to test the medical application of garlic’s 157 different pharmacological effects in the body, researchers have compared its efficacy to that of various pharmaceutical drugs. [1]  Doing so allows them to measure garlic’s action against a well-understood “control” medicine. Here’s what they found: garlic not only compared favorably to drugs, but in many cases, actually outperformed them.

Medical literature now supports the claim that garlic can successfully be used to treat over 180 different conditions, ranging from cancer to diabetes to infections of all kinds. The following “antibiotics vs. garlic” scenario is just one example that showcases garlic triumphing over Big Pharma’s side-effect-riddled franken medicines.

Antibiotics, the way Nature intended them

The abuse of pharmaceutical antibiotics is precipitating a health crisis of nearly unprecedented proportions. Antibiotic-resistant bacteria are on the rise, and even when antibiotics do still work, they decimate your microbiome, compromise your immune system, and cause chronic inflammation in the process.

And let’s not forget that even the most powerful laboratory-created antibiotics have only ever been effective against a certain spectrum of bacterial infections—most viruses, as well as some of the more powerful bacterial bugs, are unperturbed by them.

This is where garlic comes in. This humble bulb has been shown to kill at least thirteen different types of bacteria and viruses. This list includes supposedly “incurable” bugs like MRSA, [2] HIV, [3] and Herpes simplex, as well as other hard-to-cure infections like Candida, [4] thrush, [5] stomach bugs like Helicobacter pylori, [6] and Streptococcus B. [7]

When one study compared garlic to the drug metronidazole in treating vaginal infections, it reduced the infection by 70% in just seven days, as opposed to 48% in the case of the drug.

And garlic worked its magic without side effects. The same most certainly can’t be said for metronidazole, a potential carcinogen with side effects like nausea, vomiting, diarrhea, stomach pain, dizziness, and more.

And that’s just counting the infections that studies have specifically treated with garlic under clinical conditions. Further research will almost certainly reveal that garlic has an even wider spectrum of healing.

So how does garlic do it?

Unlike prescription antibiotics, which are designed as a sort of magic bullet to do nothing but annihilate bacteria, garlic heals infections through an incredibly complex web of mechanisms. As was mentioned earlier, it elicits over 150 different responses in the body. Its many healing components function as an intelligent whole, working to deliver beneficial nutrients.

While allicin and other components in garlic technically do “kill” bacteria and viruses, they do so without harming your body’s beneficial bacteria, and thus without disrupting the fragile balance of your internal flora, which is essential for proper immune function and overall well-being.

Like other functional foods, garlic heals infections by bringing balance to the body, rather than by simply destroying “foreign agents” (an allopathic process that inevitably brings even more imbalance). For this reason, garlic is also remarkably effective at preventing colds and flus in the first place.

Add more garlic to your life

If garlic’s strong smell scares you away from frequently using it as a cooking ingredient, hopefully this article has convinced you that its lingering scent is a small price to pay for its health benefits.

Including fresh garlic in cooked dishes daily will go a long way toward strengthening your body’s immune function and stress resistance. Always let garlic sit for a few minutes after it’s chopped or crushed—doing so stabilizes the allicin and other beneficial components, which could otherwise be destroyed by the heat of cooking.

For the fastest results—especially if you’re using it for a specific therapeutic purpose—try garlic extracts (Kyolic is a great brand) or garlic oil. There are even some products that are marketed as “odor-controlled.”

Nature provides many natural cures for deadly infections when drugs do not.  And many Doctors do not know about it…

Jim Andrews, Medical Researcher and Reporter, has put together a great eBook on how to protect yourself and your family naturally when antibiotics no longer work.

In Antibiotic Epidemic: How to Fight Superbugs and Emerging Bacteria with Miracles from Mother Nature, you’ll learn about miracle ingredients in your kitchen that kill MRSA… salmonella… strep throat … and more.

You never know when these deadly bacteria will strike. That’s why this is a great resource to have on hand.