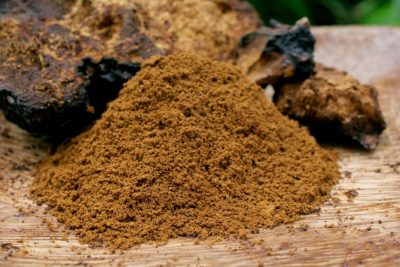 We’ve written about the healing power of medicinal mushrooms in past articles.

Medicinal mushrooms are one of the most ancient, most versatile, and most underappreciated class of natural remedies in the world. Luckily, they’re drawing an increasing level of attention from both conventional and holistic medicine, thanks to a wealth of new research.

Another potently healing mushroom that’s gaining traction in medical circles is chaga, a fungus that grows on birch trees in the cold climate of Siberia, northern Canada, and Alaska. Chaga mushrooms have a long history of traditional usage in Russia and Northern European countries, where they’re given as a treatment for heart disease, diabetes, and gastrointestinal cancer.[1] For these reasons (and many more), chaga has also been affectionately called “black gold.”

Nowadays, chaga is making a comeback in the form of an adaptogenic add-on to coffee and tea. This practice also has a long history—chaga was used as a coffee substitute during World Wars I and II, and was used as an energizing tonic for hundreds of years prior in northern Europe.

But the benefits of chaga mushrooms go far beyond coffee substitution (though the natural energy boost they provide is certainly laudable, especially for those seeking an alternative or adjunct to caffeine).

Why you should love chaga mushrooms

When steeped into a tea, chaga mushroom makes a surprisingly delicious broth (it’s understandable why it was once used as a coffee substitute). Here’s some of the benefits you can expect when sipping this ancient remedy.

Immune improvement and performance enhancement. We’ve written before about the wonders of adaptogens. They literally teach your body how to adapt more optimally to its environment, which translates to enhanced disease resistance, metabolic function, and overall performance.

Chaga is an adaptogen and immune-boosting agent of the highest order. Studies have demonstrated that chaga directly improves immune function by boosting the production of interleukin 6 (IL-6), T lymphocytes, and spleen lymphoctyes, all of which are central to immune defense.[2]

Chaga is also exemplary at minimizing systemic inflammation, which hampers immune function, slows performance, and increases the risk of disease. Reduced levels of inflammation not only unburden immune function and metabolism, but also can help prevent and treat inflammatory conditions like ulcerative colitis.[3]

Anti-viral activity. The improved immune function that chaga confers goes far beyond what many other remedies and immune tonics can offer, especially when it comes to combatting viruses. Research has shown that chaga not only helps the body defend itself against pesky viruses like the common cold and influenza, but also serious and supposedly incurable ones.

Studies have even demonstrated that chaga extracts have an anti-viral effect on human immunodeficiency virus (HIV) type 1,[4] and that they can decrease the infective properties of the hepatitis C virus by 100 times in just 10 minutes.[5]

Cancer prevention and treatment. Despite its illustrious history of folk usage and multitude of benefits, chaga has only begun to gain real notoriety in the eyes of conventional medicine because of its promise as an anti-cancer agent. Cancer is currently the number 2 killer in the United States (second only to heart disease), so researchers are working diligently to uncover more effective treatments.

It turns out that chaga mushroom lives up to its hype as a folk treatment for cancer—even the world-renowned Memorial Sloan Cancer Center has reported that “laboratory and animal studies show that chaga can inhibit cancer progression.”[6]

Some chaga extracts and powdered products are offered in the form of pills, but it is generally believed that chaga must come into contact with hot water or alcohol in order to be optimally beneficial (hot water or alcohol will break down the tough cell walls of the mushroom, thus making its nutrients available for absorption). For this reason, your best bet is to stick with alcohol-based tinctures, extracts mixed into hot water, or at-home brews made with raw chaga.

Our friends over at Four Sigmatic are giving you an exclusive offer on their Mushroom Coffees, Mushroom Elixirs, Mushroom Hot Cacao and Mushroom Superfood Blends.

Did you know that medicinal mushrooms are one of the world’s most well studied superfoods and are jam packed with amazing benefits?

CHAGA – ANTIOXIDANT PROPERTIES:
Chaga mushroom can help support immune functions. It is called the king of mushrooms. You’ll find growing naturally in the wild and it has antioxidant properties.

LION’S MANE – BRAIN & NERVOUS SYSTEM
Lion’s Mane is an all-natural cognitive enhancer. It has been shown to support memory and concentration.

REISHI – STRESS & SLEEP
If you have occasional stress and difficulty sleeping, Reishi mushroom can help you relax and get a good night sleep.

CORDYCEPS – ENERGY & PERFORMANCE
Cordyceps is an adaptogen, not a stimulant, so it helps you produce and maintain steady energy levels. Coffee can give you an energy spike, followed by a crash; cordyceps, on the other hand, helps your body produce its own energy.

Click here to get 10% off your first Four Sigmatic order