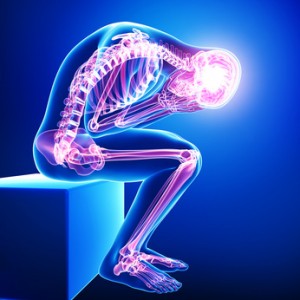 Inflammation is a colossal health problem in our society.

While it tends to be associated only with aches, pains, and stiffness, its deleterious effects on the body reach far deeper. Most health experts now agree that inflammation is the root of the vast majority of diseases.

Here’s why: inflammation is a defense mechanism that focuses your immune system’s attention toward fighting a perceived threat. This means that the immune system’s ability to fight off other bugs and pathogens is compromised.

Furthermore, inflammation itself is incredibly destructive to the body. It impairs cognition, saps the blood of nutrients, slows down metabolism, and contributes to emotional imbalance.

These “side effects” of inflammation are considered to be necessary evils by the body, which evolved its inflammatory immune response as a way to respond quickly and drastically to emergency threats. Effectively healing a wound or protecting a pulled muscle from permanent damage, for example, is worth a bit of inflammation-induced stress on the body.

The problem is that these days, our bodies are kept in a near-constant state of inflammation.

Why are we so inflamed?

It may seem strange (if not poetic) that the root of all our diseases is the overreaching of our own bodies’ defense mechanism. The story is a bit more complicated, though.

Our modern lives are inundated with immune system triggers—stimuli that, for better or worse, our immune systems perceive as threats. Food allergies, toxins, and stress are the biggest culprits.

Chronic inflammation is usually considered to be the effect of an “overactive” immune system—as though your immune function is confused or malfunctioning. Is this really what’s happening, though, or do we just live in an insanely toxic and stressful world?

After all, both stress and environmental toxins are clearly real threats, to which the body has every right to react defensively. Even the most common food allergies are simply your body alerting you to clear and present danger (most people assume that there’s something wrong with their body if they can’t process gluten, dairy, or peanuts, but the truth is that all of these foods contain substances that are objectively difficult for the human body to process).

Therefore, in order to combat inflammation, we need to help our bodies cope with this continuous onslaught of immune triggers. One of the best ways to do so is to eat an anti-inflammatory diet.

Designing an anti-inflammatory diet starts with common sense. First and foremost, get rid of everything that’s obviously detrimental to your health, like processed foods, sugars, and GMO’s.

Keeping your consumption of red meat and omega-6 fatty acids to an absolute minimum is helpful too, as both are directly linked to higher levels of inflammation.[1]

Once you’ve removed some of these stressors from your regular diet, you can add in more of the good stuff. As a general rule, a diet rich in organic fruits and vegetables (especially leafy greens, low-sugar fruits, and other veggies) and healthy fats is an anti-inflammatory one.

But let’s dive a little deeper.

While there’s an abundance of foods that meet these criteria, I’ll focus on a few that are especially powerful.

Raw cacao was called “the food of the gods” by the ancient Aztecs, and for good reason. It contains over 300 enlivening compounds (many of which are strongly anti-inflammatory), has 20 times the antioxidant power of blueberries, and is packed with vitamins and minerals.[2]

Acai berry is a low-sugar fruit that outshines the antioxidant potential of nearly every other food (with the exception of raw cacao). It also directly decreases inflammation and speeds up the body’s metabolism.[3]

Detoxifying supergreens. You can’t really go wrong with greens; they’re an invaluable part of any healthy diet. Some greens are particularly special, though. Alfalfa, dandelion, dulse, and kelp pack the most powerful nutrient punch per serving, and they’re also potent antioxidants. Spirulina and chlorella are chelators, which means they supercharge the body’s detoxification processes and accelerate the removal of heavy metals and other toxins.

Maca is a South American root that’s been used for thousands of years as a vitality elixir. It’s one of the most potent and intelligent hormone regulators around, and it’s also been shown to have antioxidant and anti-inflammatory properties.[4]

Turmeric is a true health superstar, as evidenced by thousands of studies. There seems to be no ailment that turmeric can’t tackle, and it’s one of the only foods in the world that has all four of the anti-inflammatory properties discussed above.