Will Bayer-Monsanto Ruin the Cannabis Industry?

written by Ryan
Facebook0Tweet0Pin0
You are here: Home / Featured / Will Bayer-Monsanto Ruin the Cannabis Industry? 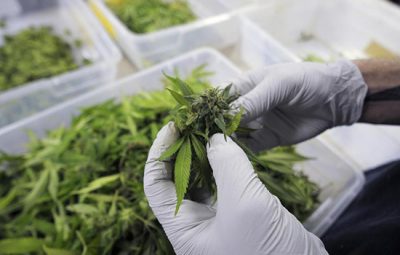 Medical cannabis is rapidly gaining momentum. This budding industry is offering a natural solution to a variety of ailments, generating economic prosperity for the states that have legalized it, and winning more and more hearts and minds with each passing day.

There’s still plenty of controversy surrounding the subject, and despite its medical and recreational legality in some states, cannabis is still federally illegal. Nevertheless, research and anecdotal reports have shown that the plant does offer a surprising range of health benefits. It’s currently indicated for mood and mental disorders, pain management, alcoholism, diabetes and metabolic disorders, gastrointestinal disorders, and cancer—and the research-backed list of applications is growing all the time.

Despite its current legal status (and the bureaucratic haul it will take to change it), by all appearances, cannabis offers great promise as a medicine of the future.

It certainly presents a welcome alternative to the pharmaceutical industry: one that enriches local economies instead of corporations, and one with a product that’s arguably far safer than pharmaceutical drugs.

For example, many of the side effects of cannabis (which are mild compared to those of many pharmaceuticals) can be attenuated by working with extracted cannabinoids and terpenes rather than the whole plant.

Furthermore, studies demonstrate that it’s physically impossible to die from a cannabis overdose; meanwhile, prescription drug overdoses kill over 30,000 people in the United States every year (that’s more than guns or cars, and more than half of all drug overdoses).[1]

There’s just one problem: the efficacy and lucrativeness of cannabis has attracted the attention of less than scrupulous powers, who are already making moves to adversely transform the industry.

The takeover has begun

Gaining legal status is the least of the cannabis industry’s worries. By now, we should know that no money-making breakthrough gets passed up by corporate monopolies of the world—and cannabis is no exception.

The pharmaceutical industry has already patented several FDA-approved cannabis-based medications, such as Marinol, Syndros, Cesamet, and Sativex. In some cases, medications are made with synthetic THC (tetrahydrocannabinol), and other times the pharmaceutical company grows cannabis and makes natural extracts.

That’s right: pharmaceutical companies are being allowed to grow their own cannabis and create synthetic cannabinoids, even in countries where it is federally illegal for private citizens to do so.

And it gets worse. Big Pharma and their corporate cronies don’t simply intend to compete against local cannabis and derivative products; instead, it seems they hope to infiltrate and monopolize the industry and every level possible.

At the center of the drama are Bayer and Monsanto, two of the world’s most notorious corporations, who are in the midst of concentrating their power through a historically unprecedented merger.

When the deal is sealed, business insiders speculate that the Monsanto name will be dropped—a wise choice, considering that Monsanto has become almost synonymous with “evil corporation” in recent years.

Bayer has managed to keep their name a bit cleaner, though their actions are every bit as despicable as Monsanto’s. The company’s illustrious track record includes covering up the risks of birth control and OTC painkillers (both of which they manufacture and distribute), distributing contaminated milk that killed 24 Peruvian children, distributing HIV-tainted blood, cheating Medicaid, perpetrating false advertising (for which they have sued), sponsoring gruesome human experiments at Auschwitz during the Holocaust, and manufacturing Zyklon-B for the Nazi’s gas chambers.[2]

In short, Bayer and Monsanto have never had our best interest in mind. If they choose to participate in the cannabis industry, it will be with the intention of profiting massively, not bettering public health and healthcare.

Prominent voices in the cannabis community have already started to warn others about the moves these companies are making. Here’s a glimpse into their game plan.

Medical cannabis. Bayer has begun selling the cannabis medications manufactured by GW Pharmaceuticals. By lobbying against the legalization of locally grown cannabis and aggressively promoting FDA-approved (patented) cannabis medications, these companies can corner the market.

Cannabis cultivation. Monsanto has developed close ties with Scotts Miracle-Gro, whose CEO has expressed intentions to buy out the entire cannabis growing industry. The company has already bought out numerous hydroponics and cannabis cultivation companies, and Monsanto is helping to ensure that only its “affiliates” can be admitted into indoor gardening expo events.

GMO cannabis. Rumors state that Monsanto and Bayer have agreed to share trade secrets regarding the development of genetically modified cannabis. This campaign would allow them the same dominance they’ve claimed over conventional agriculture, by ensuring that farmers must purchase new Bayer-Monsanto seeds each year.

We MUST Take a Stand

If we wish to see cannabis, hemp, and its derivative therapeutic products emerge as safe, affordable, locally sourced medicines, we must take a stand. The campaign closely resembles the one against GMO foods: never support companies that are owned by or affiliated with Bayer and Monsanto, always ask questions about where products are coming from, and support local economies.

Last but not least, regardless of where you stand on the legalization of cannabis, know this: federal legalization would make it much more difficult for these corporations to monopolize the industry. If cultivation and product creation remains in the hands of the few, Bayer-Monsanto will have a much smaller market to corner.