written by Ryan
Facebook0Tweet0Pin0
You are here: Home / Body / Why Milk Is Destroying Your Health (And What You Can Do About It) 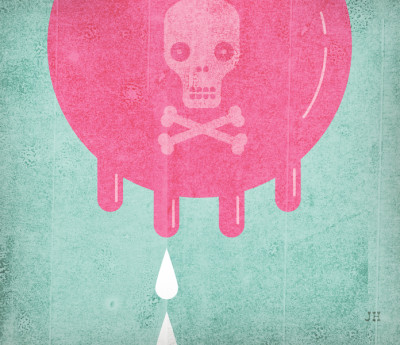 For decades, the marketing campaigns of the American Dairy Board have tried to convince us that milk is an indispensable component of any healthy diet. And it looks like they’ve succeeded.

Most people firmly believe that milk is a healthful product, and many are even able to offer well-formed arguments about its virtues.

This belief leads many to consume an alarming quantity of milk. According to the USDA Marketing Service, 56% of Americans consume between 2 and 5 glasses of milk per day, and nearly 10% consume a gallon or more![1]

But don’t start guzzling yet…and be careful how much trust you place in advertising campaigns. Because despite all the hype, milk is not good for you.

Cow’s milk is also the #1 food allergy in the country. Can this high incidence really be chalked up to a bodily disorder, or might it be more probable that the human body just has a really hard time dealing with milk?

Here’s the truth, though: it’s not milk itself that’s the culprit…it’s the way that it’s processed, as well as the way we treat the cows that produce it.

It all starts with animal mistreatment

The train of causes that makes milk so unhealthy begins long before the milk is ever produced.

This genetic manipulation (coupled with their unhealthy, soy-based, GMO feed) makes them chronically ill, so they are fed antibiotics in order to keep them well (they nearly always die young anyway, though).[3]

Furthermore, a recent FDA approval allows the use of BGH (bovine growth hormone), which increases milk production to an even greater, more unnatural degree. Some dairy farms also continue to use rBST (also known as rBGH, because it is a genetically modified version of natural bovine growth hormone), which has even more deleterious effects on the health of cows—and ultimately on the health of anyone who drinks their milk.

You probably already see where this argument is heading. Cows bred and raised like this can’t help but produce milk that is filled with antibiotics, pesticides, pathogens, and even IGF-1, which is linked to BGH usage, and causes breast cancer.[4]

All questions of morality aside, this grossly unnatural treatment of milk-producing cows creates a product that is harmful to your health.

And it gets worse.

Milk is heavily processed—under the pretense of making it safe and healthy to drink. But the effect is quite the opposite: the final product is a dead, toxic liquid that bears little nutritional resemblance to natural milk.

Pasteurization is touted as the key to ridding dairy products of pesky bacteria and other pathogens. Unfortunately, it also kills all of their beneficial enzymes. It also destroys 100% of vitamin A (and possibly vitamin C, as well), 38% of B vitamins, and many amino acids.[5]

Because it is denatured, pasteurized milk is incredibly hard for the body to digest.

This is one reason why experts believe milk consumption is linked to diabetes and related diseases (because indigestibility places immense stress on the pancreas, which can lead to insulin resistance).

There are three types of pasteurization:

Regular pasteurization, during which milk is heated to 145 degrees Fahrenheit for 30 minutes.

High-Temperature Short-Time (HTST) pasteurization, during which milk is heated up to at least 161.6 degrees Fahrenheit for 15 seconds.

Ultra-Heat Treatment (UHT) pasteurization, during which milk is heated to 280 degrees Fahrenheit for a minimum of two seconds.

The hotter the temperature, the longer the milk’s shelf-life. This is good for profit margins, but bad for your health—because despite claims to the contrary, all three pasteurization methods destroy lactase, galactase, and phosphatase (the enzymes that allow us to digest and assimilate the nutrients in milk).

And to top things off, pasteurization often doesn’t even accomplish its intended purpose—one third of pasteurized milk is still contaminated with dangerous pathogens.[6]

Homogenization is a mechanical process that gives milk a more uniform consistency by breaking down fat molecules and preventing them from separating. The fat in non-homogenized milk will naturally separate, forming a layer of cream at the top of the container.

While some studies suggest that homogenization doesn’t negatively alter milk, the subject is still a controversial one in the natural health community.

There’s evidence that homogenization allows for easier absorption of a potentially harmful protein called xanthine oxidase. This protein would normally be broken down during digestion, but instead is protected by homogenized fat globules, and thus allowed to pass intact into the bloodstream.

Furthermore, homogenization increases the likelihood of rancidity, because fats placed under high pressure tend to oxidize. These oxidized fats can wreak havoc in the body by allowing for the formation of nasty free radicals.

Synthetic vitamins and additives are pumped into milk to try to make up for the damage done by pasteurization and homogenization.

So here’s what you can do

While the mainstream dairy industry is overdue for some serious reforms, you still have options—even if you can’t stand the thought of giving up milk.

Always buy organic. This should go without saying. While even organic milk will carry the risks that come from pasteurization and homogenization, it’s generally free of antibiotics and genetically modified hormones.

Always make sure to do your due diligence, though. Industrial food producers are masters of finding loopholes. Before purchasing any milk product, make sure that it was produced by cows that are fed with organic, non-GMO, rBST-free feed.

Try milk alternatives. There’s a plethora of delicious milk alternatives to choose from, including hemp, almond, coconut, flax, rice, and sunflower. Many of these milks are even more nutritious than natural cow’s milk.

Just try to avoid soy milk, which carries as many potential problems with it as regular milk.

Drink raw cow’s milk. If you’re determined to stick with cow’s milk, there’s a ton of evidence to suggest that raw milk is the healthiest possible route for you to take.

While you can’t just walk into any store and purchase raw milk, it can often be found directly through local farms and food co-ops. Search for local groups and ask about it at health food stores in your area.

It’s worth the effort—raw milk is enzymatically active, hypoallergenic, never contains antibiotics or hormones, and comes from cows that live much happier, healthier lives.