written by Ryan
Facebook0Tweet0Pin0
You are here: Home / Body / Why Gluten-Free Products Are As Harmful As Gluten (Here’s the RIGHT Way to Be Gluten-Free) 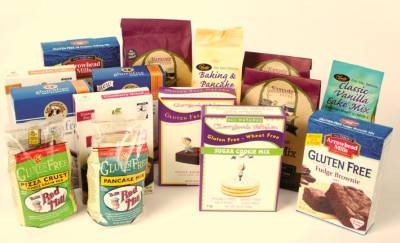 By now, you’ve undoubtedly been affected in some way by the gluten-free craze.

Perhaps a friend or family member has been diagnosed with gluten intolerance, or maybe you’ve even personally sworn off gluten.

There’s certainly some good reasons to do so. Mounting evidence suggests that even if you’re not officially gluten-intolerant by medical standards, wheat-containing grains can still be incredibly harmful to your health. Some health experts even believe that gluten intolerance is an inevitable consequence of consuming gluten for a long enough period of time—because your body inherently recognizes that gluten is damaging, and eventually begins to put up defenses against it.

After all, some of the gluten-like compounds found in grains are specifically manufactured by plants as toxins. For example, the high level of wheat germ agglutinin (WGA) in many grains is meant to discourage predators from eating them. As a result, it’s highly toxic to both the brain and the heart.[1]

Wheat-containing grains just might be the body’s worst enemy…

If this statement seems overblown, just consider the facts.

Gluten and related compounds (like WGA) cause hormonal disruption, destroy your microbiome and cause digestive problems, stresses the immune system, and trigger massive inflammation.

Even this last point on its own is a good enough reason to steer clear of gluten, as inflammation is arguably the root of all disease. When you consider all the rest of its acute dangers (it’s been said that gluten can be directed linked to the development of over 55 debilitating health conditions)[2], it becomes clear that consuming a high-gluten diet is the height of foolishness.

If you haven’t yet tried removing gluten from your diet for a period of time, you really should. You don’t need to accept any of the claims made above on faith—just trying being gluten-free for a month, and you’ll feel the difference.

Are you sure this whole “gluten-free” thing isn’t just a fad?

You might still be skeptical. People were pretty enthusiastic about the Atkins Diet too, and look how that turned out, you might be thinking. Is gluten-free really the way to go, or is this whole thing just a giant, money-making fad?

One thing’s for sure: there’s plenty of companies that are taking advantage of this gluten-free feeding frenzy by selling exorbitantly priced products that are marketed as being “healthy.”

But you should always remember that something isn’t healthy just because it’s gluten-free. In fact, many gluten-free products are as bad or worse than gluten itself.

For example, one of the qualities that makes gluten so inflammatory to the body is its high glycemic load, which sends blood sugar levels soaring. Research in the American Journal of Clinical Nutrition even demonstrates that eating a couple slices of whole wheat bread is worse for your blood sugar (and more inflammatory) than drinking a whole can of soda or eating a candy bar. You could eat six teaspoons of straight sugar and do less damage than by eating those morning slices of toast.[3]

So here’s the kicker: gluten-free breads have exactly the same effect. Some of the gluten-free alternatives used to make them, like rice flour and syrup, can spike blood sugar even more quickly. The same holds true for all those gluten-free pretzels, chips, cookies, and other nutritionally useless snacks—which still manage to be sold as health foods.

The Ingredients in Most Gluten-Free Products Will Also Send Your Blood Sugar Soaring!

In place of wheat flour, most gluten-free products – and many online recipes for that matter – use flours with glycemic values that are off the charts, including:

They’re all packed with processed ingredients, and in some cases, even flat-out poisons (rice flour has been shown to contain high levels of arsenic).[4]

So what’s the right path?

All of these facts support the argument that, in many ways, gluten-free products are an even more insidious danger than gluten itself. Their green-washed, feel-good marketing garb lull us into a false sense of security, and lead us astray from a truly healthy lifestyle.

While the sins of these products certainly don’t undermine the argument against eating gluten, they’re also not a viable alternative. Being gluten-free the right way requires a knowledge of balanced nutrition, as well as the willingness to re-engineer your diet from the ground up.

Even gluten alternatives should be regarded as treats to be enjoyed infrequently—only in this case are they actually a better choice than good-old glutinous food.

And most importantly, free yourself from nutritional dogmas that stand in the way of truly educating yourself about optimal health practices (such as “anything gluten-free is healthier than gluten”).

Also check out this book “Better Breads” from Kelley Herring the founder of Healing Gourmet.  After months of testing and hundreds of trials, Kelley has “cracked the code” on making gluten-free, low-glycemic bread that tastes so good, you’ll never look back.