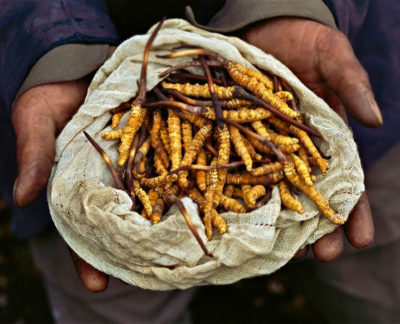 We’ve written before about the wonders of medicinal mushrooms. Often referred to as “the original superfoods,” these special edible mushrooms are turning lots of heads in the natural health world.

Prized since antiquity as anti-aging tonics—Reishi mushrooms were even called the Elixir of Immortality—medicinal mushrooms are just beginning to get the mainstream attention they deserve.

One particularly powerful mushroom is cordyceps, which has been used as a natural medicine for thousands of years. Cordyceps mushrooms grow only in the high-elevation mountain regions of the world (most wild specimens are found in China and other parts of the Himalayan range), and thus were a rare treasure sought by ancient healers and herbalists.

Unlike other mushrooms (which tend to grow out of dead trees and foliage, or straight out of mycorrhizal networks in the ground), cordyceps grow right out of the backs of insects, parasitically consuming their host in the process.

They’re so highly evolved at this task that some species are capable of advantageously modifying the behavior of the host insect. For example, the fungus will influence ants to climb to the tops of trees, so that the spores from the cordyceps fruiting body will be able to travel further.

If this all sounds a bit creepy to you, don’t worry: wild-harvested cordyceps are very rare even today, and commercially available supplements are grown in controlled settings without the use of insects.

And besides, this peculiar method of growth and reproduction isn’t the only thing that makes cordyceps mushrooms unique—they’re also a remarkably healing food capable of dramatically boosting energy levels, warding off a staggering variety of diseases, and optimizing the entire body for performance and longevity.

People first started using cordyceps medicinally when they noticed that animals would quickly grow strong and energized after eating them.

People first started using cordyceps medicinally when they noticed that animals would quickly grow strong and energized after eating them. It didn’t take long to discover that they affect humans very similarly, providing unparalleled energy, stamina, and disease resistance.

Unlike coffee and other stimulants—which tax the body and lead to an inevitable crash—cordyceps energize you by supporting and fine-tuning the body on every level.

Researchers have uncovered a few mechanisms that account for this sustainable stimulation and full-spectrum health support.

1. Adaptogenesis. Cordyceps’s keystone mechanism is their ability to function as an adaptogen. As we discussed in another article, adaptogens train the body how to cope with external stressors, so that it can more effectively resist disease and degradation.

2. Antioxidant activity. When the body undergoes stress of any kind, whether emotional stress or physiological stress triggered by toxins and pathogens, the body is riddled with free radicals formed by oxidative stress. Cordyceps powerfully combat free radicals, by acting as an antioxidant in their own right, and by potentiating your body’s own endogenous antioxidants (like superoxide dismutase and glutathione peroxidase).[2]

Their free-radical-fighting has been shown to improve functioning of the brain, heart, immune system, and reproductive system, all by supercharging the body’s natural detoxification mechanisms. The study cited above even showed that cordyceps supplementation decreased all of the major markers for aging in mice.[3]

3. Anti-inflammatory activity. As we’ve discussed many times before, chronic inflammation is a leading risk factor for nearly every prevalent disease. It’s not surprising, then, that some of cordyceps’ anti-aging power is attributed to the anti-inflammatory compounds it contains. These compounds have been shown to protect nearly every bodily system, to heal autoimmune diseases, and even to fight cancer.[4]

And that’s still just the tip of the iceberg.

Thanks to these three full-spectrum healing mechanisms, cordyceps can be successfully used to treat a wide array of diseases and conditions, including bronchitis and other respiratory conditions, chronic fatigue syndrome, kidney disease, heart disease, high cholesterol, bladder infections and other urinary problems, reproductive issues, coughs, colds, flus, hepatitis B and other viruses, circulation issues, muscle weakness, and more.[5]

They even act as a natural aphrodisiac, fight diabetes,[6] and improve liver function.[7] So regardless of what aspect of your health you’d like to improve, supplementing with cordyceps mushrooms can help.

How to use cordyceps mushrooms

As mentioned above, cordyceps used to be an incredibly rare commodity—but we’re lucky enough to live in a world in which they’ve become readily available. Seek out a reputable company, and use whatever form you prefer (powders, capsules, and tablets are all available).

In most cases, you can simply follow the dosage instructions included with whatever product you purchase. If you buy bulk cordyceps, though, start with 5-10g—this dosage can be taken twice a day if you’re using codyceps to treat a specific health issue, or a few times a week for general health maintenance (it certainly doesn’t hurt to take them every day, though).

Like most natural medicines, side effects are few and far between with cordyceps. Because they’re so strongly immune-boosting, though, exercise caution if you have a condition characterized by overactive immune function, and make sure you supplement under a doctor’s supervision.