The Top 10 GMO Foods to Avoid 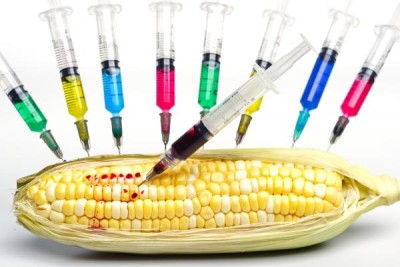 GMO’s are sweeping across the food industry like a plague.

Despite a public outcry against GMO food—as well as a mountain of evidence suggesting that it’s extremely detrimental to our health—its prevalence in our food system continues to increase. Current estimates that 70% of the food in grocery stores is genetically modified.[1]

Recent initiatives in Colorado and Oregon put forth a ballot measure that would have required the labeling of all GMO foods.

Even though 85% of the participants in a recent survey say that they’re concerned about GMO’s,[2] the measures were defeated in both states. You can bet that had something to do with the $21 million pro-GMO propaganda campaign launched by a coalition comprised of the usual suspects, including Monsanto, DuPont, and Coco-Cola.

It was agonizingly close in Oregon (a mere 0.3% margin, and ballots were even recounted), which speaks to the growing awareness around GMO foods.

For the time being, though, our food supply is still being polluted with mutant products that undermine health and decrease life expectancy. Animal studies have even demonstrated that just a 33% GMO diet can cause life-threatening diseases, with 50% of males dying prematurely and 70% of females dying prematurely.[3]

If you can’t beat them, avoid them

Because GMO foods aren’t going anywhere anytime soon, we simply need to learn how to avoid them.

Doing so is just a matter of knowing which products are most suspect, learning the secret code of industrial food ingredients, and paying close attention to everything we purchase.

Corn is the #1 GMO offender. GMO corn is literally designed to release bug-fighting toxins all the time—which is an excellent trick for warding off insects, but it also happens to be terrible for your health.

It’s also drenched in enough pesticides to kill regular corn, and withstands the chemical malaise only because it’s been modified to be pesticide-resistant. But, in case you were wondering, your body was not designed for the regular consumption of insect-killing chemicals.

And I’m not just talking about corn-on-the-cob. Anything made from corn poses the same dangers: high-fructose corn syrup, maltodextrin, tortilla chips, and even meat from animals fed with GMO corn.

Your only safe bet is to purchase only organic corn products (and only organic, grass-finished meat).

Soy is another highly dangerous GMO food that’s in everything. Even organic soy has phytoestrogens that can be harmful to the body, so it’s generally a good idea to avoid soy altogether.

If a product contains soy in any form, just don’t buy it!

Sugar is another favorite of GMO food manufacturers. As though sugar wasn’t already a strong enough health destroyer, GMO sugar beets were introduced into the market in 2009, thus taking the health-sapping potential of sugar to another level entirely.

Sugars should be avoided in general, but if you simply must have sweeteners, try to use raw honey instead. And remember: a staggering array of packaged products contain sugar, so always read ingredient lists.

Aspartame is a GMO sweetener that’s used in many diet sodas and other “zero-calorie” products. Representatives of companies that use aspartame in their products often argue that it’s a simple and “natural” amino branch chain that is completely safe for human consumption.

You could technically call it natural…but here’s the reality behind their claims: much of the aspartame on the market is now made by growing it on the feces of GMO bacteria.

It doesn’t get much grosser than that!

That description—even without the GMO warning—should be enough to convince you to avoid this synthetic abomination. In case you need some more convincing, though, just know that aspartame is a powerful neurotoxin that wreaks havoc on the entire neurological system and central nervous system.[4]

And by the way, it also converts into formaldehyde when exposed to temperatures over 86 degrees Fahrenheit.

Here’s a great way to ensure that you avoid aspartame (or whatever other toxic laboratory creation that Monsanto would love for you to buy): just avoid all artificial sweeteners.

Canola oil is a toxic, polyunsaturated fat that is manufactured from rapeseed, nearly all of which is GMO.

Unfortunately, canola oil is one of the cheapest on the market, so it is ubiquitous in restaurants and the food industry. If possible, ask restaurants what kind of oils they use.

At home, use organic, unrefined coconut oil and grapeseed oil for high-heat cooking and olive oil for low-heat cooking.

Cotton oil is largely a Chinese import, and is almost always genetically modified. While cottonseed oil isn’t widely used for cooking, it still manages to work its way into every nook and cranny of the food industry (it’s in everything from animal feed to cosmetic products).

And while we’re on the subject, it’s worth mentioning that much of the US’s non-organic cotton is also GMO—a whopping 94%, according to the USDA.[5]

With an increasing number of studies linking GMO’s to cancer, neurological damage, infertility, behavioral issues, hormonal imbalance, and nutrient deficiencies,[6] do you really want GMO cotton that close to your skin, day after day? Better to stick to organic cotton.

Dairy. Bovine growth hormone is a GMO that is in 30% of milk in the US. This is most likely why milk has been linked to a rise in ovarian cancer and reproductive issues, and why it leads to massive hormonal imbalances in children.[7]

While more and more health experts are recommending against milk in general (especially non-organic), raw milk is still a healthful (but hard-to-acquire) dairy product.

Perhaps what’s best is to make your own milk alternatives from almonds or cashews—it’s absolutely delicious, and it’s one of the only ways to ensure that you know exactly where your milk came from.

If you’d rather purchase your milk alternative, always choose organic, and make sure that it hasn’t been irradiated.

Papaya. An increasing percentage of papaya, along with some other exotic fruits, are GMO. Genetic modification—as well as other harmful practices like irradiation—increase shelf-life and thus allow these far-flung fruits to be more easily and profitably transported to market.

Once again, just make sure that you always buy certified organic fruit, and you’ll be just fine.

Becoming more conscious about what ends up in your own grocery basket is the first step toward playing an active role in the fight against GMO’s.

Here’s how else you can help: support local farmers, farmer’s markets, and coops, grow your own produce, and vote YES on all GMO labeling measures in your state.

Let’s regain control of our food system, so that it once again can serve as a provider of health and vitality, rather than an engine of profit and greed.