How Smudging Kills Bacteria In The Air (and more)

written by Ryan Greendyk
Facebook0Tweet0Pin0
You are here: Home / Body / How Smudging Kills Bacteria In The Air (and more) 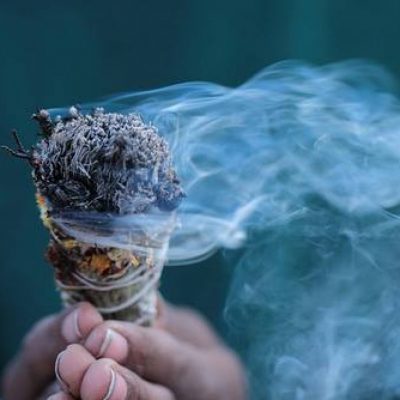 We’ve written before about the benefits of “smudging”—that is, the burning of sage or other traditional plants for cleansing purposes.

Despite being lauded and consistently practiced by indigenous cultures for thousands of years, smudging has been met by mixed reception within modern society. Native Americans, as well as diverse Asian and proto-European cultures, believed (and continue to believe) that the smoke from sage and other herbs is capable of cleaning “negative energy,” whether it’s occupying a space or being carried by a person.

At first glance, this may sound like nothing more than a “woo-woo” concept, but it shouldn’t be dismissed too quickly.

First and foremost, it’s important to note that the prevalence of charlatans and pseudoscience in the New Age spiritual community has given many indigenous rituals and healing practices a bad name. Nevertheless, the vast majority of these ancient traditions have true, legitimate worth—they’ve been vetted by the cultures who use them for hundreds or even thousands of years. The fact that they’ve been coopted by the New Age community doesn’t invalidate them.

Furthermore, medical researchers have now risen to the task of testing the legitimacy of practices like smudging—and the results reveal that ancient cultures were right about its benefits all along.

Scientific researchers may not use terms like “negative energy,” but they have certainly confirmed the “cleansing” properties of smudging (and the end result is certainly the same).

A study published in the Journal of Ethnopharmacology demonstrated that the smoke from burning sage (what the authors of the study call “medicinal smoke”) is able “to completely eliminate diverse plant and human pathogenic bacteria of the air within confined space.”[1]

Here’s how it works (from a scientific point of view), according to researchers: the medicinal smoke is believed to release negative ions, which bind to positively ionized particles like bacteria, viruses, mold spores, pet dander and other allergens, dust, and other hazardous particulates. Research suggests that sunlight and natural water sources engender negative ions, as well, so there’s obviously something fundamental about them.

At this point, indigenous cultures would include non-physical explanations and appeals to spiritual mythology in order to explain the incredible effects of negative ions. It’s entirely possible that such a worldwide is more complete and accurate than our scientific one—but for better or worse, modern researchers must stick to the facts.

The ritualistic use of plant smoke stretches back to the prehistorical era and is still used, the world over, as a way of ‘cleansing’ the spirit. Now modern scientific research reveals that the practice may actually have life-saving implications by purifying the air of harmful bacteria.

Luckily, the facts reveal some pretty amazing reasons why you may want to start smudging your own home.

Kills Bacteria and Germs. The same study quoted above discusses potential medical applications of smudging. Due to its remarkable ability to clear pathogens in the air, researchers believe it could hold promise as a pulmonary and dermatological antimicrobial agent (that is, a tool for clearing bacteria and other pathogens from the respiratory tract and skin).

Natural antidepressant. The negative ions present in medicinal smoke has another fascinating benefit: it balances mood and dispels depression (as well or better than pharmaceutical antidepressants, according to some data).[2]

A research engineer named Dr. Clarence Hansell first stumbled upon the benefits of negative ions in the 1930s. The negative-ion-charged air that some of his equipment produced led to such a dramatic mood boost in his coworkers that he decided to investigate further. A study in 1976 demonstrated that negative ions can balance levels of serotonin, which we now know has at least an indirect effect on the maintenance of mood and energy levels. The study cited above followed in the 1990s, and now negative ion therapy is finally gaining traction as a treatment modality for depression.

Improved sleep and performance. Due to its ability to modulate serotonin, the negative air ions (NAI) in smudging smoke provide a range of other benefits, as well. In 2013, a team of Italian researchers sought to delve deeper into the positive effects of NAI. Their analysis confirmed that NAI treatment works on par with antidepressants for mood disorders, and also observed that negative ions balance sleep patterns, promote restfulness, and improve physical performance.[3]

An opportunity for ceremony

You can, of course, simply purchase air purifiers and other machines that produce negative air ions, rather than smudging your home. Even if this is the route you choose to take, though, try to recognize that the ceremonial aspect of medicinal smoke is one that sets it apart from modern technologies.

Smudging is an opportunity to step into an ancient, sacred tradition, and to bring this same sacredness into your own home. It is a form of moving meditation—an invitation to participate intentionally in the process of cleansing your body and space.

Use a sage bundle or other herb arrangement of your choice (We like growing sage in my garden and making homemade bundles, but they’re also readily available online). Carry the burning herbs over an abalone shell, clay bowl, or other heat-resistant surface. Feathers are great tools for directing the smoke over your body and to all corners of the room, but they’re not necessary if you don’t have any handy. Always open a window before smudging, so that all that negative energy has a way to leave the space.

Give it a try…you might be surprised how great you and your space feels, even after your first session.