Monsanto’s Crimes against Humanity (Will They Finally Get What’s Coming to Them?)

written by Ryan
Facebook0Tweet0Pin0
You are here: Home / Featured / Monsanto’s Crimes against Humanity (Will They Finally Get What’s Coming to Them?) 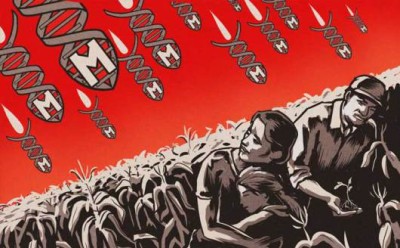 The world had high hopes for the COP21 (the “Conference of Parties” climate talks in Paris). The outcome of this ambitious gathering sounds promising enough on paper: the finalized “Paris Agreement” officially conveys the shared intention to keep the world’s temperature no more than 2 degrees Celsius warmer than pre-industrial times.

This declaration has been met with mixed reviews, though, mainly because the conference yielded few set-in-stone commitments from any of the countries in attendance, other than assurances that they would reduce carbon output “as soon as possible” and “do their best” to keep global warming at bay.

Luckily, though, the momentous event did serve as fertile ground for lots of grassroots organizing around a number of critical subjects. For example, a coalition of environmentalists, farmers, and sustainable food organizations banded together to address the relationship between climate change and unsustainable agricultural practices. In the center of their crosshairs is Monsanto, the agribusiness monstrosity which is the largest single perpetuator of unsustainable farming in the world.

The International Monsanto Tribunal—as the coalition calls itself—announced at the COP21 that it will hold a trial in October 2016, on World Food Day, to try Monsanto for crimes against humanity.

If you know even a fraction of Monsanto’s infamous history, you’ll know that this charge is quite fitting. The Tribunal rightly points out that Monsanto is one of the world’s leading contributors to anthropogenic greenhouse gas emissions in the world, and that their operations are directly linked to the depletion of natural resources, the pollution of ecosystems across the planet, the extinction of animal and plant species, and the resulting decline in worldwide biodiversity.

When they’re not denying these allegations outright, Monsanto likes to claim that their business practices are small sacrifices made for the good of the human race, whose sustenance and care is their first priority. But their conquest for world domination has been detrimental for human society too—millions of small farmers have been displaced, and countless of communities have been torn apart in their toxic wake.

Is Monsanto really so bad?

If you’ve read our articles in the past about the ravages of glyphosate, the prevalence of critically depleted soils around the world, and the litany of risks associated with GMO foods, you probably already know the answer to this question.

Mainstream media likes to claim that Monsanto is unfairly used as a scapegoat by science-denying, progress-halting environmentalists, but let’s be honest: their whitewashed propaganda is getting harder and harder to swallow. Monsanto’s chemicals have been conclusively linked to a staggering array of conditions, including cancer, autism, kidney disease, and birth defects. [1] The World Health Organization considers glyphosate a “probable human carcinogen,” and a new study demonstrates that it’s 125 times more toxic than regulators claim it is. [2]

For these reasons and many more, countries around the world are banning GMO foods and glyphosate-containing pesticides at an increasing pace. Nevertheless, the meddling of lobbyists and corporate control of our government keeps such measures tantalizingly out of reach for the United States.

This is exactly why movements like the International Monsanto Tribunal are so important: only by calling attention to the morally reprehensible nature of Monsanto’s business practices can we ever hope to banish their toxic products from our food supply.

Mainstream media sources have criticized coverage of the Tribunal, stating that it’s not a “real” trial. It is true that the October 2016 event will be a citizen’s tribunal, but this doesn’t mean that it’s not an important and significant step in the right direction.

Those who criticize the actions of the Monsanto Tribunal misunderstand its true intentions. With their trial, the Tribunal seeks to encourage a rethinking of “crimes against humanity”—they intend to push for an official redefinition that includes “ecocide” (the ecological destruction of the planet), so that companies like Monsanto can finally be punished for their flagrant disregard for the planet’s health (and our health, for that matter). If we ever want to see Monsanto face a real international trial, we first need to evolve the way in which our society regards unsustainable business practices.

If you’d like to stay involved in this groundbreaking work, you can follow the progress of the Monsanto Tribunal (and donate to their cause) here. Also, be sure to sign this long-standing petition requesting that the Secretary-General of the United Nations bring real charges against Monsanto.

Together, we can create a food supply system that safeguards, not undermines, the certainty of our society’s future.