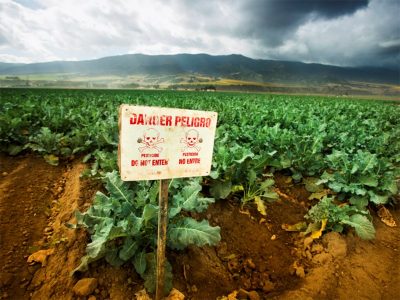 We’d all like to believe we live in a world that can be taken at face value—one in which the system works as it should, without corruption, backroom deals, and legal loopholes. Living and working in integrity seems like a simple enough prospect, and it seems obvious that our industrial undermining of our health and the environment cannot continue.

The unfortunate truth, however, is that everything is not as it seems, and that many people in positions of great power do not heed the imperatives of ecological and personal sustainability.

Take as a prominent example the EPA’s recent overturning of the ban on chlorpyrifos, the main ingredient in a pesticide manufactured by Dow Chemical. The EPA cited “serious scientific concerns and substantive process gaps” as an explanation for the change of heart, but many believe the story to be more complicated.

Dow’s best-selling pesticide has a long and controversial history. It has been in use since 1965, despite escalating concerns regarding its impact on human health. Following a rigorous Human Health Risk Assessment by the EPA, chlorpyrifos was banned in 2000 for household pesticide applications.

The assessment revealed significant potential health consequences, including damage to the parts of the brain that control memory, learning, language, behavior, and emotion. These effects appear to be most pronounced in children who have been exposed to chlorpyrifos, and can lead to IQ impairment, attention disorders, and other cognitive and behavioral dysfunctions.[1]

Nevertheless, over 40,000 farms still spray this worrying chemical on fifty different types of crops. A decade ago, two environmental groups organized a petition to enact a nationwide ban on all uses of chlorpyrifos, and in 2015 the Obama administration backed the idea.

The ban was well on its way to being implemented, but Scott Pruitt, the new head of the EPA under the Trump administration, rejected it earlier this spring. He maintained that further study is needed in order to obtain “regulatory certainty,” even though EPA employees concluded last year that the pesticide should be banned.

This decision as a frightening sign. The pesticide industry’s heavy lobbying is well-known, but the EPA has long been viewed as a bastion of ecological integrity, an agency staunchly dedicated to protecting the health of American citizens and the environment, not the bottom lines of chemical manufacturing companies.

The Environmental Working Group reports that Croplife America, the primary lobbying group for the pesticide industry, petitioned the EPA in late 2016 to reject the proposed chlorpyrifos ban.[2] It seemed that the EPA would hold its course, and in fact was even scheduled to finalize the ban in March 2017—until Scott Pruitt and the Trump administration took the reins.

The EWG has pushed back hard against the decision to reject the ban, and has organized a petition and funding campaign to reopen the discussion. EWG President Ken Cook expressed his disapproval for the new EPA administrator by stating that, “like a toddler running toward his parents, Pruitt leaped into the warm and waiting arms of the pesticide industry.” Cook also reminds us that Pruitt is a man who “isn’t sure if banning lead from gasoline was a good idea.”[3]

Keep in mind that the EWG is not in the business of fear-mongering, exaggerating, or taking sides. They are an evidence-based organization dedicated to educating and protecting the public—they’re the folks we have to thank for invaluable resources like the annual Dirty Dozen testing results. Unlike the EPA, they provide transparent, honest assessments of environmental risks, and truly do have our health in mind.

And besides, the overturning of the ban is anything but fringe news. The event was covered by the full gamut of mainstream news outlets, and all of them pointed out that Scott Pruitt rejected the ban despite the EPA’s own evidence against the pesticide.

If you’re interested in more evidence demonstrating the grave health risks of chlorpyrifos-containing pesticides, there’s no shortage of it.

The latest incident occurred not long after Pruitt’s rejection of the ban: forty-seven farm workers near Bakersfield, California complained of vomiting, nausea, and gastrointestinal distress after being exposed to chlorpyrifos. And the farm they were working on doesn’t even use the chemical; it was later confirmed that the pesticide was carried by wind from a neighboring farm. For this reason, many families in California’s Central Valley fear that they are being slowly poisoned by pesticide drift.

What you can do to fight back

Sadly, Scott Pruitt’s decision heralds an era of more relaxed regulation of industrial chemicals—but this doesn’t mean we just have to sit back and let it happen.

The Environmental Working Group is doing everything they can to fight for tougher regulation. We’re lucky to have them on our side at a time when it seems that the EPA has forsaken the very mission for which it was created.

You can read the EWG’s guide on how to avoid chlorpyrifos-contaminated foods here, and you can support future EWG petitions and action campaigns by donating here.