How Farming of the Future Could Save Our Food System

written by Ryan
Facebook0Tweet0Pin0
You are here: Home / Featured / How Farming of the Future Could Save Our Food System 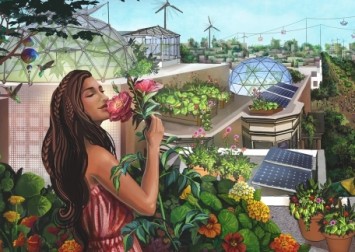 During a recent visit to some hot springs in southern Colorado, I wandered away from our cabin to explore the neighborhood. I came across “Welcome” and “Come On In!” signs, which led me up a long, dirt driveway to a greenhouse complex tucked against the base of towering, granite peaks.

Heading inside one of the greenhouses, I discovered a vast and delightful farming operation. The space was filled with advanced hydroponic systems of the owner’s own design, rows of beautifully routed tomato vine networks, special lighting, and vertical growing towers. Classical music—which, the owner informed us, helped his plants to grow—played throughout the greenhouse.

By talking further with the owner, I learned that his master-crafted farming setup provided impeccable, organic produce to coops and farmer’s markets all over Denver and Boulder. I had heard of new farms that use technologically advanced setups to grow massive amounts of produce in a sustainable fashion, but I had never seen one in person—it was immediately clear that I was witnessing the future of farming.

Despite the impressiveness of this family farming operation, it pales in comparison to some of the country’s top indoor vertical farms. These futuristic farms are changing the game of food production by pioneering methods for sustainably producing huge quantities of food.

For this reason, an increasing number of policy makers, entrepreneurs, and scientists see this new kind of farming as a solution to the encroaching crises of food shortage, water shortage, and the destruction of the environment by industrial agriculture.

Perfect weather conditions, on demand. Another factor that increases the yield of indoor vertical farms is the ability to control climate conditions. Because indoor farm operators can precisely control conditions with computer-monitored LED systems and energy-efficient heating and watering systems, they’re not subject to droughts or seasonal changes—food can be efficiently and sustainably grown 365 days a year.

Location, location, location. As intimated above, nearly any indoor space can be converted into a vertical farm. This versatility creates farming opportunities in urban and suburban areas, and increases the likelihood of more local farming operations. This means that produce doesn’t need to be trucked thousands of miles across the country from mega-farms.

No pesticides. Indoor operations also don’t require pesticides, because the tightly controlled growing conditions naturally keep pests away. Indoor vertical farms—even the largest in the country—can therefore boast that their produce is pesticide-free and non-GMO…and they still outproduce those pesticide-soaked field farms.

The right kind of technology. Indoor farmers are further increasing yields by discovering, through genomic sequencing, what seeds respond best to the specific types of lights used in their operations. Thus, this new breed of farmer is learning how to increase production by mimicking natural selection, rather than attempting to hijack and alter biology for their own means (as is the case with GMO’s).

Indoor vertical farms represent a powerful movement toward a more sustainable food system—one that is free of woeful resource inefficiency and the food monopolies created by giant, land-owning agriculture businesses.

As these technologies become more universally available and affordable, though, local farmers (and individuals with green thumbs) will be empowered to start their own operations. Then it’s only a matter of time before local, highly efficient indoor farms begin to take precedence over the grossly unsustainable industrial farms that currently feed much of the world. Companies like FarmPod in Santa Fe, New Mexico are already beginning to offer outfitted “pods” that allow food coops, grocery stores, businesses, or families to produce their own food supply.

In an age where GMO food production has made the health-conscious community wary of science, the indoor farming movement demonstrates the right way to scientifically innovate solutions for our problematic food system.

Despite the frightening reality of our current industrial agriculture system, the future of farming holds bright possibilities—it’s a future in which local farmers and eco-conscious entrepreneurs blend cutting-edge science, a love of plants, and maybe even a bit of classical music to produce all the food we need.