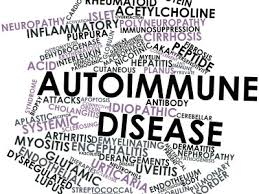 Your immune system is an invaluable line of defense against harmful foreign agents, so when it’s not functioning properly, the effects can be devastating. An increasing number of Americans suffer from autoimmune disorders—a condition in which the body essentially attacks itself.

To understand autoimmune disorders, let’s first take a brief look at how the immune system works. When a foreign agent (also known as an antigen) enters the body, the immune system marks it as a threat, and then releases antibodies and inflammatory chemicals.

Antibodies bind to antigens and neutralize the threat of systemic infection, and inflammatory chemicals keep the body on high alert until the job is done.

This is all well and good when there’s actually a foreign agent that needs to be eliminated; in this case, acute inflammation is a small price to pay for keeping the body healthy. But in the case of autoimmune disorders, the immune system misidentifies the body’s own cells as antigens, and produces antibodies against them.

Such conditions can be dangerous and debilitating, as the downward spiral of chronic inflammation and antibody production can cause escalating damage to many organs throughout the body.

Mainstream doctors claim that there are no cures for autoimmune disorders

Even more sadly, mainstream doctors claim that there are no cures for autoimmune disorders, and that the only available choice for patients is to superficially manage symptoms.

The most common treatment is the administration of immunosuppressants, which (just as the name suggests) suppress immune functioning. This route temporarily minimizes the damage that can be caused by the immune system attacking the body’s organs, but it’s a woefully inadequate long-term solution.

Suppressing the immune system is tantamount to shutting down the body’s defense systems, and therefore patients end up fighting a two-front war: one against their own immune system as well as foreign agents, to which a suppressed immune system is dramatically more vulnerable.

And besides, immunosuppressants do nothing to correct the underlying immune dysfunction—instead, patients are left in a fragile limbo of symptoms management, with little to no hope of full recovery.

But there’s a better way

What’s needed instead is immunomodulation, a holistic balancing of the immune system’s overall function, rather than the short-sided suppression commonly embraced by doctors.

While there are many natural remedies that can accomplish this task, one of the most powerful of all is turmeric. This may not come as a big surprise, given turmeric’s remarkable resume of healing properties, but mainstream medicine is only beginning to discover just how helpful this ancient, golden root can be for autoimmune patients.

Here’s how turmeric restores the immune system to balance.

You may already be aware that turmeric is one of the most remarkable natural anti-inflammatories on the planet. So, since controlling inflammation response is one of the keys to balancing the immune system, turmeric is a perfect match for autoimmune issues.

A mountain of studies has demonstrated that turmeric halts the production of inflammatory chemicals, and even that it modulates the signaling pathways implicated in inflammation.[1]

When looking at these mechanisms in the context of autoimmune dysfunction, researchers also found that turmeric even inhibits the activation or migration of immune cells and antibodies, thus effectively protecting the body against damage.[2]

For example, one study showed that curcumin (one of the active constituents in turmeric) inhibits the proliferation of effector memory T cells, an important immune cell responsible for the production of antibodies.

Best of all, turmeric works without suppressing overall immune function (i.e. it appears to stop antibodies from binding to cells within the body, while preserving its ability to fight pathogens in its normal fashion).

Just make sure to use the right kind of turmeric…

Whether you’re suffering from an autoimmune disorder, or just want to keep your immune system in tip-top shape, turmeric is an excellent ally.

It has one drawback, though: its healing components are very hard for your body to absorb (this is known as low bioavailability). Using fresh turmeric root or powder is certainly healthful, but you need to use a specially formulated version of turmeric in order to enjoy the full depth of its benefits.

Even the popular practice of mixing turmeric with some kind of milk to make “golden milk” will only take you so far. Golden milk approximates a more advanced and effective formulation method called micelle liposomal which makes turmeric up to 185 times more absorbable by encapsulating turmeric inside a type of fat called phospholipids.

If you’re serious about combatting autoimmune disorders and other inflammatory conditions through natural means, be sure to add liposomal turmeric to your daily regimen.