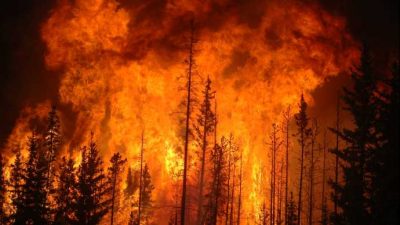 As of mid-October 2017, forest fires continue to rage across Northern California. Property damage has already topped $3 billion, and the property analytics firm CoreLogic reports that costs could skyrocket to $65 billion before the fires are fully contained.[1] The fires have claimed 42 lives, and have displaced tens of thousands from their homes.

Those who have safely evacuated, or whose homes are at a safe distance from the blaze, still have cause for worry—air pollution. Air quality health warnings are in effect across the entire state, and those within range would do well to heed them.

Furthermore, these fires are a tragic reminder that air pollution is a constant reality in industrial society. A meta-analysis published in the journal Lancet found a strong connection between air pollution and cardiovascular dysfunction, the number one killer in the United States[2]—and that’s just one way in which air pollution adversely affects us each and every day. Whether or not you’re directly affected by the California fires, detoxing from air pollution is an important aspect of maintaining optimal health.

Before we dive into specific detoxification practices, though, let’s look more closely at why air pollution (whether it’s generated by forest fires or the normal workings of society) can be so bad for your health.

The dirty truth about air pollution

When we think of air pollution, we usually think of the toxic exhaust of industry and transportation (i.e. carbon monoxide, ozone, and the like). While these gases certain can have an impact on our health (and they’re certainly having an impact on the environment, via global warming), airborne particulate matter is even more of a problem.

Particulate matter is an obvious danger posed by forest fires, which carry fragments of biological material (as well as whatever other materials the fire burns through). This kind of air pollution is ever-present even without forest fires, though: heavy metals, industrial pollutants, and myriad other toxins all routinely make their way into the air we breathe.

Studies have shown that these toxic particulates can cause all sorts of serious health issues, including systemic inflammation (the root of nearly every health problem), DNA damage, respiratory issues, and numerous heart problems (including atherosclerotic lesions and cardiac hypoxia).[3]

Luckily, you do not have to be a victim of the air that you breathe. Being vigilant about including detoxification practices in your life can minimize oxidative stress and protect you from the health effects of airborne toxins.

We’ve written a lot about detoxification practices in past articles—after all, they’re pivotally important for preserving your health in today’s polluted world. Unless you live far away from any vestige of industrial civilization, you’re undoubtedly contending with its byproducts. Here’s just a few of the top tools and practices that will help you keep toxins at bay.

Cruciferous vegetables. We’ve said it once, and we’ll say it again: cruciferous veggies like kale, broccoli, spinach, arugula, and Brussel sprouts are absolute health powerhouses. Sulfurophane (a compound present in all crucifers) is the most powerful inducer of phase II enzymes ever discovered (these enzymes are pivotal to detoxification). One study conducted in a dangerously polluted region of China found that broccoli sprouts can directly “enhance the detoxification of some airborne pollutants.”[4]

Turmeric is well-known for its profound antioxidant and anti-inflammatory properties, both of which are key aspects of preventing the damage caused by air pollution. Studies have also shown that curcumin (one of the active constituents in turmeric) prevents the depletion of glutathione, the body’s “master antioxidant” that oversees detoxification processes.[5] Just make sure you’re using a highly bioavailable version of turmeric—like this one, which also contains ginger and vegan omega-3 fatty acids, both of which have their own strongly detoxifying properties.

Cinnamon. We’ve written about the benefits of cinnamon before—it can naturally regulate blood sugar levels, ward off disease, and clear the body of oxidative stress. This same properties also make it a potent protector against airborne toxins. Cinnamaldehyde, a flavonoid in cinnamon, helps to “switch on” a whole collection of genes implicated in the body’s antioxidant and detoxification functions, according to researchers.[6]

Cold water immersion. As we discussed in a previous article, cold showers and cold plunges can dramatically transform your health. While they take some getting used to, the benefits are well worth it. In addition to radically boosting the immune system, aiding toxin elimination, and improving other detoxification functions, daily cold water immersion can also enhance energy, performance, and even mood.

Liposomal glutathione. Maintaining high levels of endogenous glutathione is essential to keeping your body’s detox engines running. While oral supplementation didn’t used to be a viable way to increase glutathione levels in the body, cutting-edge formulation methods have finally made it possible. While the diet and lifestyle recommendations above are always the best place to start, combining them with direct glutathione supplementation is one of the most powerful ways you can supercharge your body’s detoxifying and self-healing capacities. We highly recommend this liposomal glutathione offered by KorFactor.