written by Ryan
Facebook0Tweet0Pin0
You are here: Home / Body / Is Cold Water the Ultimate Depression Cure? 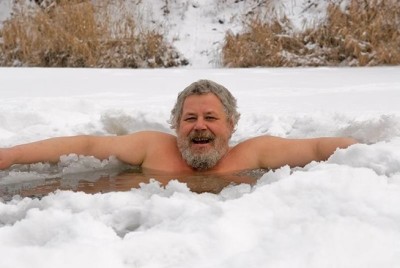 According to the most recent statistics from the CDC, one out of every twenty Americans suffers from depression.

A full 27% of these people report that their condition is so bad that it prevents them from performing everyday activities or associating with others. If you’re ever suffered from even mild depression, you know how difficult the experience can be. In a world as beautiful and varied and abundant as ours, any emotional offset that disconnects you from daily experience is a tragedy.

The main solution to this monumental health issue that’s offered by conventional medicine is prescription antidepressants. 230 million prescriptions are filled for these drugs every year—a number which doubles nearly every ten years—and they seem to be barely working. Sadly, this epic medical failure is covered by up drug companies, which net billions of dollars per year from the sale of antidepressants.

Psychiatrists too have been coopted by the pharmaceutical industry, to the point where the prescription of antidepressants is a nearly automatic response to a depression diagnosis. And besides, psychiatrists have a $330 billion industry to protect—they’d be out of the job if all their patients actually were cured of their depression. Talking therapies and other real therapy-based depression treatments can actually be immensely helpful, but the public’s trust of the helping professions has been partially eroded by the dismal success rate of antidepressants.

But, contrary to popular opinion, there are natural treatment solutions for depression that are natural and fast-acting. One of the most promising of all is cold water exposure.

Not just for polar bears and yogis

You heard that right—frequent exposure to cold water can alleviate depression in a surprisingly short amount of time. More and more people are discovering that cold water therapy can change your life—it’s now being applied as a health optimization technique by athletes, biohackers, and alternative health practitioners.

This practice of hydrotherapy is not without historical precedent; spiritual and medical traditions throughout recorded history have lauded the virtue of cold water bathing (yogis would travel vast distances to find solace in the glacial waters of Himalayan waterfalls). Hippocrates believed that hydrotherapy “allays physical and mental weakness,” and the tradition played an important role in 19th century German naturopathy.

Only recently, though, has modern medical science had anything positive to say about it. Researchers from the Virginia Commonwealth University School of Medicine reported that depressed patients experienced a significant mood improvement because of cold water exposure. They simply took a 2-3 minute shower at 68 degrees Fahrenheit, once or twice daily for two months.[1]

Other research has also demonstrated that hydrotherapy is remarkably effective at relieving depression’s symptoms and related conditions. One study found the practice to be more effective at ameliorating anxiety and mood instability than Paxil (a leading pharmaceutical),[2] and another found that cold water exposure works wonder for both depression and chronic fatigue.[3]

So although more rigorous research is necessary, it seems that cold showers and cold plunges finally have Western medicine’s blessing. In case you still think that this stuff is just for thrill-seeking members of the Polar Bear Club, though, let’s take a look at the hard science behind it.

During our millions of years of evolution as primates, we were routinely subjected to “physiological stressors” (like temperature fluctuations or even brief dips in cold water), which lead to the cascade of certain beneficial chemicals in the brain and body. Researchers hypothesize that depression could in part be caused by the nearly complete lack of physiological stressors in our comfort-driven, climate-controlled society.

Cold water exposure thus helps us return to a natural state of balance by activating the sympathetic nervous system, increasing blood flow to the brain and core, and increasing blood levels of beta-endorphin and noradrenaline. It also helps calm systemic inflammation, which is strongly linked to depression. And by the way, exercise (which could also be viewed as a kind of self-induced physiological stressor) also triggers some of these positive effects—so an exercise routine followed by a cold shower can deliver a powerful one-two punch to depression.

Here’s another fascinating effect of cold showers: because your skin has far more cold receptors than warm receptors, sudden exposure to cold water sends what researchers call “an overwhelming amount of electrical impulses from peripheral nerve endings to the brain.”[4] It is believed that this unwitting brain stimulation can have a potent antidepressant effect—a hypothesis borne out by the effectiveness of electroshock therapy against depression.

The punchline is that cold showers can offer remarkable relief from depression, without any of the side effects, complications, or associated costs of prescription antidepressants, electroshock therapy, and other medical interventions. And they feel absolutely invigorating too!

So are you ready to take the plunge?

It’s really not so bad. In fact, nearly everyone that adopts cold showers or cold plunges as a daily practice learns to love it much more quickly than you’d expect. Personally, I consider my daily cold shower one of my most important and influential practices of the entire day—I enjoy it immensely, and I wouldn’t give it up for anything!

If you’re still apprehensive, here’s some good news: studies demonstrate that just 30 seconds per day of cold water exposure can have a significant effect on your emotional state on overall well-being.[5]

All studies on the subject showed that 68 degrees Fahrenheit is cold enough to confer great benefit, and the study with the most structured protocol suggested a 5-minute pre-adaptation period—meaning that participants gradually turned the water from hot to 68 degrees over the course of 5 minutes. A lot of enthusiasts (myself included) swear by the “all-at-once” method, though, simply because sudden immersion in cold water is shockingly effective (no pun intended) at dispelling fatigue, cloudiness, and mood imbalance almost immediately.

Just do whatever works for you, and find your own rhythm. A 30-second cold shower after a long, hot shower, with a 5-minute “adaptation” period, is absolutely better than nothing (give the sudden immersion method a try at least once, though). Applying almond oil, apricot oil, or coconut oil beforehand can make the experience easier, as the oil offers a bit of a protective barrier against the cold. Once you’re under the cold water, rub your body vigorously—doing so helps you acclimate more quickly, increases blood flow, and (if you applied oil) moisturizes your skin in the process.

Give this admittedly intimidating practice a try for at least a few weeks. If the sheer invigoration of the experience doesn’t get you hooked, its incredible mood-lifting and health-supporting benefits surely will.

[5] Alexa Fleckenstein, Health20: Tap into the Healing Powers of Water to Fight Disease, Feel Younger, and Look Your Best