written by Ryan Greendyk
Facebook0Tweet0Pin0
You are here: Home / Body / Congress Is Poised to Crush the GMO Labeling Movement (You Can Help Stop Them) 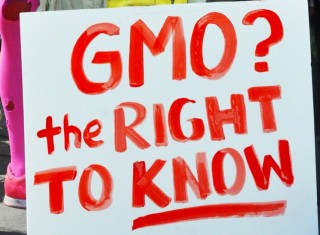 The movement to make the labeling of all GMO products mandatory is growing steadily. March Against Monsanto, Millions Against Monsanto, Right to Know GMO, and dozens of other organizations are working feverishly to raise awareness about GMO’s.

Their message is simple: everyone has a right to know when they’re eating GMO foods.

Regardless of what you think about GMO’s (the debate over their effects on human health is a furious one), you can’t really deny that people have a right to know what’s in their food.

This brilliant tactic sidesteps the controversy over GMO’s effects on human health and the environment. Monsanto and its cronies have an endless budget for propaganda and biased research, so most credible information about the dangers of GMO end up being marginalized, ridiculed, and discredited by the mainstream.

It’s a bit harder, however, to deny people’s “right to know.” Monsanto’s representatives are livid about GMO labeling proposals, and claim that such labeling would erroneously give a bad name to their “harmless” products.

In many cases, this retort has actually made more people suspicious of GMO’s. If their product really is so harmless, then why are they so afraid to have it labeled?

The GMO industry has effectively backed itself into a corner…and it’s losing supporters quickly.

But Monsanto has other tricks up its sleeve…

Seeing that its public support is slipping away, the GMO industry is changing its tactics— they’ve funded and molded a legislative bill that anti-GMO organizations are calling The Mother of All Monsanto Protection Acts.

H.R. 1599, which is misleadingly entitled “The Safe and Accurate Food Labeling Act,” has already made it in front of Congress. If passed, the bill would prevent all food manufacturers from labeling GMO products, and would supercede states’ rights to pass GMO labeling laws and GMO crop bans.

It would also crush any hope of having any pre-market GMO safety standards developed by the FDA or the USDA—because such standards would be considered an “inaccurate” and unfair bias against GMO products.

For the same reason, this insidious legislation would even strip local farmers of their right to establish GMO-free farming zones—so GMO contamination would be rampant.

For these reasons and more, the bill is being referred to by the anti-GMO movement as the DARK Act (Deny Americans the Right to Know).

This isn’t the first bill introduced that gives industrial agriculture companies like Monsanto exactly what they want—but it’s certainly a decisive one. If passed, the DARK Act will make it extremely difficult for the GMO labeling movement to keep its current momentum.

Don’t let them take away your rights!

Luckily, each and every one of us can help. Agribusiness may have oodles of money and power, but we still have strength in numbers. And while the state of our “democracy” arguably isn’t what it used to be, there’s still checks and balances in place to stop entities like Monsanto from tyrannically achieving its goals.

Here’s the bottom line: if Congress doesn’t pass H.R. 1599, Monsanto loses this battle. Most members of Congress haven’t yet committed to a position on the bill, which means that they’re still open to being persuaded one way or the other.

If enough of us contact our Congressmen and convey exactly why they should vote against this horrendous bill, there’s still great hope.

Remember to do your homework first: find out if your Congressman has already declared a position or not, so that you have a frame of reference when reaching out to them.

Give specific reasons why you believe that they should vote down the DARK Act (remember to refer to it as H.R. 1599). For example, here’s one that they’ll love: a whopping 86% of voters are in favor of GMO labeling. Members of Congress are always looking for ways to align themselves with their constituency, so make it clear that this one is a slam dunk for them. Can you think of any other public issue that has such a high percentage of voters committed to one side of the fence?

You can also remind them that GMO’s are not proven to be safe, because—as per the preferences of agribusiness—no safety tests or standards are allowable. Companies like Monsanto deny these tests, and then claim that their products are “proven” to be safe. They can’t have it both ways!

Mike Pompeo, the House Rep. who introduced the bill, stated that “there exists no evidence that genetically engineered foods posed a health or safety risk to humans.”[1] Tell your Congressman that this is blatantly untrue. GM products have been definitively linked with tumors, gastric lesions, organ failure, nutrient deficiency, allergic reactions, liver damage, kidney damage, and more.[2]

We’re at a critical juncture: more than two dozen states are on the verge of passing GMO labeling laws. The scales are finally tipping—but the passing of the DARK Act could bring us all the way back to square one.

Please take action by urging your Congressman to vote against this bill. The future of our food supply chain, our personal health, and our planet’s biosphere depend on it.