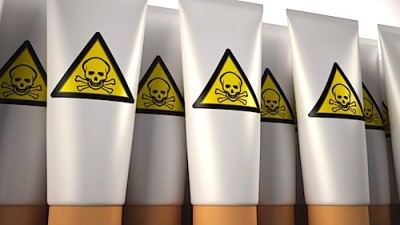 We’ve confronted the issue of manmade environmental toxins in past articles.

These days, it seems like pretty much everything causes cancer (or some other worrying health condition): processed foods, GMO produce, cell phones and other EMF-emitting technology, flame-retardant-soaked furniture, fluoride-poisoned tap water, and even the air we breathe.

There’s no doubt about it: your body’s detoxification system has a full-time (and nearly impossible) job on its hands. The least we can do is help lighten its load.

One way of doing so is to include detoxification practices as part of our ongoing routines—which can take the form of fasting, cleansing, or eating detoxifying foods as often as possible.

An even more common-sense way to protect ourselves, though, is simply to avoid as many manmade toxin sources as possible.

While this lifestyle can get pretty tricky in some cases (avoiding air pollution is a fairly futile task and we’re pretty much surrounded by EMF-radiating technology whether we like it or not), making choices about which consumer products we use is a bit simpler process.

I’ve talked before about the dangers of industrially products like cleaning solutions, cosmetics, and sunscreens. Here’s another prominent example to add to your watch list: skin moisturizers.

So my moisturizer causes cancer too, right?

I hate to break it to you, but yes, it probably does.

A study published by the National Center for Biotechnology Information demonstrated that moisturizers containing certain toxic chemicals (more on those in a bit) can significantly increase the risk of developing skin cancer.

During the study, irradiated mice that had moisturizer applied to their skin five times per week exhibited 69% more tumors than the control group.[1]

This experiment proves that toxic moisturizers can worsen and accelerate the development of cancer. It also suggests that people who are already at risk for skin cancer should definitely steer clear of the toxins found in many popular moisturizers (and I would advise staying away from them regardless).

Obviously, this doesn’t mean that all moisturizers are carcinogenic, but with so many available products, it can be difficult to know which ones to avoid. Here’s the offending products that were identified by this study: Eucerin, Dermabase, Vanicream, and Dermovan.

The complete list of toxic moisturizers would probably occupy the majority of this article—these four products just happen to be ones with research-confirmed toxicity.

While more research is necessary to show definitively what makes these products dangerous, there’s a handful of noxious ingredients that always seem to make an appearance whenever there’s a question of toxicity.

The worst of these toxins is sodium lauryl sulfate, which is in nearly all hair and skin care products. Product manufacturers continue to deny that it’s dangerous in any way, despite innumerable studies that link it to endocrine disruption, possible immune suppression, and accumulation of toxins within the body (probably because it makes the skin more permeable, thus allowing environmental toxins to enter the bloodstream more easily).

Parabens, isopropyl palmitate, and propylene glycol have similar negative effects. They also paradoxically make your skin more dry over time—partially because of irritation from incoming toxins, and partially because your skin becomes trained by these chemical moisturizers to stop producing its own moisturizing oils.

The story is pretty much the same with ceteareth-20, except this scary-sounding chemical has the added bonus of contaminants that are also known carcinogens, such as 1,4-dioxane and ethylene oxide.

BHT and isopropyl myristate are linked with a frightening array of side effects, including stomach issues, compromised gut flora, immune dysfunction, cancer, liver damage, and irritation of the skin, eyes, and lungs. Some moisturizers even contain sodium hydroxide—also known as lye, the incredibly toxic irritant that’s the main ingredient in drain cleaners.

Simple ways to protect yourself

It’s truly disheartening that companies would even think to include ingredients like this in their product formulations (especially now that their toxicity has been demonstrated by numerous studies).

Luckily, there’s a simple rule of thumb that you can use to protect yourself from this corporate negligence: just stay away from products with long lists of unpronounceable ingredients, and stick with plant-derived formulations.

And in most cases, it’s not even necessary to buy pre-packaged products—Nature has already provided us with ready-made, perfectly designed moisturizers.

Coconut oil is a fabulous moisturizer all on its own, and it even remains solid at room temperature, so it’s easy to transport and apply. Best of all, it’s also a delicious and amazingly healthful dietary addition, so you can stock up on it as a multi-purpose health product. I always get a kick out of adding coconut oil to my morning smoothie, and then while waiting for it to blend, applying some oil as a moisturizer and using some more for an oil pull (swishing coconut oil in your mouth for a few minutes and then spitting it out is a great way to detox in the morning).

You can get fancier by adding aloe vera, liquid vitamin E, almond oil, or essential oils (sandalwood oil is particularly moisturizing) to your homemade moisturizer. Beeswax will also help thicken the mixture.

Get creative and have fun with your DIY skin care. Most importantly, remember that any one of these natural ingredients will be more moisturizing and drastically safer for your body than any of those store-bought chemical concoctions. Companies work hard to convince you that natural alternatives couldn’t possibly be as effective as their products…but this just isn’t true.

Give these natural moisturizers a try, and find the recipe that works best for you (the possibilities are endless)—you’ll wonder why you didn’t ditch the expensive, cancer-causing ones a long time ago.