Are Your Almonds Toxic?

written by Mentor
Facebook0Tweet0Pin0
You are here: Home / Body / Are Your Almonds Toxic? 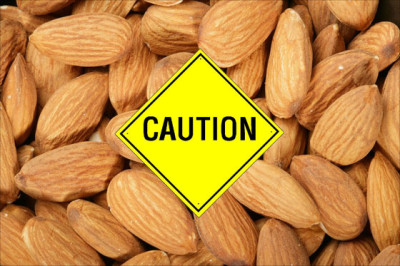 In recent years, almonds have achieved a sort of nutritional stardom among nuts. California (the largest domestic producer) can’t pump out enough of them to keep up with the demand, and they’ve even been deemed a “superfood” by some health advocates.

They certainly do have their virtues: they’re a fairly good source of high-quality protein, they’re packed with vitamins, nutrients, and healthy fatty acids, and they’re an efficient, clean-burning source of energy for the body (as opposed to carb-heavy snacks, which spike insulin and lead to an inevitable crash).

These benefits are multiplied when almonds are soaked and sprouted—doing so removes an enzyme inhibitor in the skin that prevents your body from absorbing all of their nutrient goodness. And besides, what’s better than a savory, high-protein morsel that’s bursting with living vitality?

But you know the drill: these days, there’s a dark side to everything consumer-related, even health foods. It seems like the food industry manages to corrupt anything it touches—or at least anything that it tries to turn into a mass-produced, highly profitable commodity.

Almonds are no exception.

My almonds are covered with what?

When almonds began to gain in popularity, their newfound fame was quickly marred by claims that raw almonds were contaminated with diseases. Regulatory administrations frantically launched into action, and before long, almond pasteurization was made mandatory in the United States.

The real story is that a measly 33 people supposedly contracted salmonella from raw almonds (out of the millions of people across the country who routinely consume almonds every day), and not a single person ever died.

Imagine if regulatory agencies and governments could be so quick to place protective restrictions on products that actually cause massive problems, such as poorly tested pharmaceutical drugs, GMO foods, and toxic pesticides.

But that’s jumping ahead in the story.

After these regulatory measures were put in place, it became nearly impossible to procure truly raw almonds in the United States. This is a darn shame, because pasteurized almonds contain drastically fewer nutrients than raw almonds.

Furthermore, some studies demonstrate that the heat that almonds undergo during pasteurization leads to the creation of acrylamide, which can cause cancer and reproductive toxicity.[1]

That’s okay…I always buy the almonds labeled as “raw,” you might be saying to yourself. Unfortunately, the issue is more complicated than that.

Most grocery stores (with the exception of a very few high-end health food stores and local coops) have only two kinds of almonds available: “roasted” and “raw.” As was implied above, though, the vast majority of raw almonds that are produced and sold in the United States are not actually raw.

In many cases, they’re simply pasteurized by some method other than the conventional steaming process. This technicality seems to make many product packagers content with their erroneous packaging, and others simply stick by the claim that raw simply means “not roasted.”

And as for these “other methods” of pasteurization, they’re even worse than the old-school method.

One of them is irradiation, which is just what it sounds like: almonds are blasted with radiation to kill any resident bacteria (along with anything good that the nut once contained, as well). Irradiated foods have also been shown to induce many of the negative health effects that you’d expect from radiation, including immunotoxicity, chromosome damage, cancer, and nutrient deficiency.[2]

And it gets worse. One of the most commonly used almond pasteurization methods of all is fumigation with a toxic substance called propylene oxide (PPO). Propylene oxide is classified as a Group 2B substance by the EPA, which makes it a “probable human carcinogen” (you know, just like DDT, glyphosate-containing pesticides (article link), and other popular industrial chemicals).

This chemical, which authorities maintain is completely safe, is also used in the production of polyurethane plastics and antifreeze, and it was once used as racing fuel.

Needless to say, these dangers far outweigh those of truly raw almonds, which are very rarely “contaminated” with anything harmful (and even when they are, soaking them for 24 hours can often solve the problem).

So why was the government so quick to make pasteurization mandatory? The answer is clear when you follow the money.

By requiring pasteurization of a product for there’s a skyrocketing demand,  governments can send lots more business to industrial bigwigs and chemical manufacturers—the same ones who send lobbyists to Washington and buy power with their bottomless bank accounts.

Keeping almonds raw—even though they’re much better for you that way—doesn’t make any of these key players any money.

So what’s the solution?

If you’re going to purchase almonds at your local grocery store, be absolutely sure to buy organic. Organic almonds still aren’t raw (even if they’re labeled as such), but they’re at least not irradiated or fumigated.

This is where we get all of our almonds…and it sure is a joy to have them around. I sprout them, use them to make homemade almond milk (and then use the leftover almond meal to make gluten-free cookies and cereals), or just eat them raw.

So if you enjoy having almonds as part of your health food repertoire, just keep the dangers discussed above in mind. Take the time to find almonds that you know aren’t poisoned and drained of their nutritional value. You’ll feel (and taste) the difference.