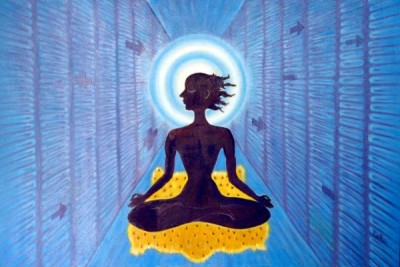 It’s estimated that up to half the world’s population suffers from some kind of addiction. And that’s just counting addictions to specific, physical things—generally negative behavior patterns are another matter entirely.

The reality is that everyone has some kind of destructive or unhelpful pattern that they’d like to change (except maybe the occasional far-flung yogi who’s hot on the heels of enlightenment).

An increasing body of scientific evidence shows that meditation is a powerful tool for enacting this kind of change. This wouldn’t be news to the spiritual teachers of old—over 1500 years ago, the great sage Patanjali wrote that “meditation removes the disturbances of the mind.”[1]

But now that ancient lore is gaining backing from modern science, meditation is becoming increasingly accessible to a greater number of people. Now more than ever, it can be applied in a systematic way to achieve the precise changes that you desire in your life.

Addictive and otherwise negative patterns can be overcome…and it all starts with brain chemistry.

All repetitive behaviors (whether desirable or undesirable) can be correlated with a physiological pattern, network, or configuration of neurons in the brain. In the case of substance addiction, these neuronal patterns are worn into deep grooves, because the brain is being stimulated by psychological behavior and by physical substances that alter brain chemistry.

Thus, overcoming addiction requires a similar two-pronged approach—one which is able to target both behavior and brain chemistry.

Support groups and addiction counseling can help an individual change their lifestyle and behavior patterns, but they don’t do much to realign the brain with more desirable neuronal patterns. In most cases, recovering addicts are simply made to suffer through the long withdrawal process (or they’re given other, equally addictive drugs to ease the discomfort, which is awfully counterproductive).

Here’s where meditation comes in.

This is your brain on meditation

While scientists can’t measure the subjective state of nirvana, samadhi, or deep meditation, they can look at what the brain is doing while a meditator is in these states. And according to a wealth of studies, the brain does quite a lot during meditation.

A study published in the journal NeuroImage showed a profound difference between the brains of meditators and non-meditators, and demonstrated that meditation physically reshapes the brain.[2]

The caveat here is that all repetitive behaviors will reshape the brain and allow neural networks to develop—that’s how we’re able to learn and improve skill sets.

Usually, though, practicing a given activity will only rewire the brain in a way that makes us more proficient at that particular activity. For example, practicing baseball makes us better at baseball, and practicing memory exercises improves our memory.

Meditation is different. Research has shown that practicing meditation doesn’t just make us better at meditating—it can improve a wide range of chosen skillsets, depending on how we design our meditation practice.[3]

This is why meditation is so powerfully effective against addiction, which involves a complex web of behavioral factors.

Eileen Luders, a meditation researcher in the Department of Neurology at the University of California Los Angeles School of Medicine, says that “meditation offers freedom for people by changing the way the brain responds to negative thoughts.” She’s found that the brains of meditators have higher levels of gray matter, which makes them “better at controlling their attention, managing their emotions, and making mindful choices.”[4]

Tap into your infinite potential

Here’s the punchline, in less clinical terms: meditation gives you the ability to redesign your body, mind, and life. What greater tool could there be for treating addiction and moving beyond self-defeating patterns?

Mukta Kaur Khalsa, who quite literally wrote the book on healing addiction using meditation techniques, believes that “the human potential of each person is infinite,” and that by tapping into this potential using meditation, any barrier can be overcome.

Her new book, Healing Addictive Behaviors (affiliate link) is a fascinating and comprehensive manual for using what she calls “yogic science” to move past specific drug addictions. In it, she walks the reader through the process of designing a practice that will improve blood chemistry, metabolism, nervous system function, and glandular health, revitalize energy levels, and encourage a holistically healthy lifestyle.

In order to bring about lasting change, it’s important to commit to an ongoing meditation practice; thinking of it as a quick fix is completely beside the point.

Nevertheless, many studies have shown that meditation can create positive change (in subjective emotional states, lifestyle patterns, and brain chemistry) within weeks, days, and even minutes.

But don’t take the scientific community’s word for it…see for yourself and know for yourself.  After all, there’s no substitute for personal experience—and it will take years for science to catch up with the ancient transmitted wisdom of spiritual teachers.

Healing Addictive Behaviors is a great introduction to a powerful body of kundalini yoga and meditation techniques and teachings that are specifically designed to catalyze the brain changes necessary for breaking free of addiction.

However you choose to introduce yourself to meditation, though, just remember this: you are the master of your own life—and meditation is the most powerful tool available for teaching ourselves how to apply this truth, each and every day.