Valerian Is More Than Just a Natural Sleep Aid

written by Ryan
Facebook0Tweet0Pin0
You are here: Home / Featured / Valerian Is More Than Just a Natural Sleep Aid 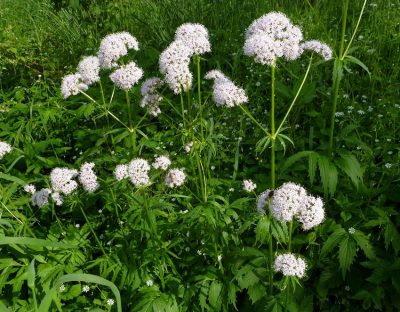 If you’ve heard of valerian root (Valeriana officinalis), you probably know it as a natural remedy for insomnia and anxiety. It’s been used medicinally for these ailments at least since the time of ancient Greece and Rome—renowned early physicians such as Hippocrates and Galen prescribed it specifically for insomnia.

Thus, if valerian did nothing more than offer an alternative to toxic pharmaceutical sleep aids and anxiolytics, it would be worth keeping in your herbal first aid kit. But modern research has revealed that valerian root has many other benefits too—it isn’t nicknamed “all-heal” for nothing.

Let’s take a tour of valerian’s many health benefits and applications, starting with those for which it’s so well-known.

How valerian benefits the brain, body, and psyche

Sleep improvement. Unlike conventional sleep aids, which essentially force your body to go to sleep, valerian works in a sustainable way to create the conditions necessary for restful sleep.

Studies have shown that the valerenic acid in valerian increases brain levels of GABA, a neurotransmitter linked to sleep, stress response, and mood modulation.[3] Other studies have demonstrated that valerian decreases the time needed to fall asleep and increases depth and overall quality of sleep,[4] even in those diagnosed with insomnia.[5]

Relief from anxiety. Valerian can be so effective at easing anxiety that it has been called “nature’s valium” (it even targets the same areas of the brain). Studies have demonstrated that valerenic acid has “potent anxiolytic effects” and dramatically decreases “anxious behaviors,”[6] and that high doses of valerian (1000 mg/day) taken over the course of 6 weeks can reduce the symptoms of anxiety and depression by up to 66%.[7]

Anti-inflammatory benefits. Researcher have shown that valerian reduces the activity of NF-kappaB,[8] a pathway strongly implicated in pro-inflammatory signaling throughout the body.[9] As we’ve pointed out in past articles, chronic inflammation is a leading factor behind nearly every ailment and health problem—so this potent anti-inflammatory mechanism helps explain why valerian can be beneficial for so many different issues.

Improvement of ADHD and OCD. Valerian’s ability to increase GABA levels in the brain has very interesting implications for the treatment of mood and behavior disorders such as attention deficit hyperactive disorder (ADHD) and obsessive compulsive disorder (OCD).

Improvement of memory and cognitive function. Valerian is exemplary for minimizing both inflammation and oxidative stress, two of the primary risk factors of cognitive decline. Thus, researchers have shown that valerenic acid can significantly improve memory by reducing oxidative stress in the hippocampus,[13] and even that taking valerian can decrease the risk of cognitive decline as a complication of heart surgery and other serious health problems.[14]

Support for fibromyalgia. Given that valerian can ease both physiological inflammation and the psychological experience of anxiety (two major nodes in the complex web of factors that influence fibromyalgia), it stands to reason that valerian would offer some relief to those suffering from this condition. One study demonstrated that bathing in a valerian bath three times per week significantly improved many symptoms of fibromyalgia, including sleep quality, pain, and overall well-being.[15]

Cardiovascular support. Valerian may even be a heart-healthy herb to integrate into your life. Studies have revealed that consistent use of valerian (even short-term) can strengthen, relax, widen, and increase the elasticity of blood vessels (most coronary events are at least partially caused by vascular dysfunction).[16] Other studies suggest that these mechanisms can help lower blood pressure (another positive marker of heart health).[17]

Because valerian is such a well-known and widely available herb, it’s easy to integrate it into your natural health regimen. Any well-stocked grocery store or health food store will offer a wide variety of teas, capsules, and formulas—try out different forms of valerian from reputable brands, and see which work best for you.

We find that encapsulated valerian has a stronger, more directly sedative effect, while valerian teas tend to be more calming (without necessarily causing drowsiness)—but each individual’s experience will be slightly different.

Always remember that valerian is a powerful medicine (we tend to forget that simple herbs can be as powerful as pharmaceutical drugs). Don’t mix it with alcohol or other sedatives, and talk to your doctor before taking valerian if you’re currently taking any prescription medications.