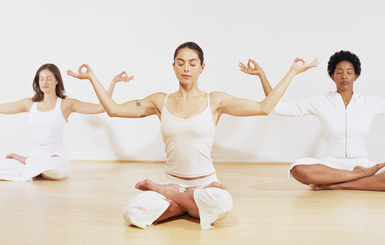 To say that yoga has exploded in popularity over the course of the last decade would be an understatement. Not so long ago, “people confused yoga with yogurt” (in the words of one yoga teacher)[1]—and now this near universally known practice has redefined a large aspect of both American spirituality and fitness.

On the surface, increasing awareness around yoga seems like a positive happening. After all, yoga practice promotes and facilitates mindfulness, poise, and balanced physical health. Nevertheless, there is a shadow side to yoga’s rising stardom.

More than a few yoga enthusiasts look disappointingly on the glamor, competition, and body-centric ethic around which much of mainstream yoga culture is focused. They worry that yoga has strayed from its ancient and original spiritual tenets—that it has sold out. This fear is certainly corroborated by the fact that yoga represents a $27 billion industry. The practice has become increasingly associated with (expensive) materialism—perhaps this is why 30% of Yoga Journal’s readership has an annual income of over $100,000.[2]

For all its distracting fashion and misplaced priorities, though, yoga continues to offer immense benefit to our society. As more and more “yoga clichés” are exposed, the practice gets closer and closer to its deeper foundation. And researchers are finding that this alignment with its spiritual roots unlocks yoga’s ability to benefit not only your physical body, but also your mental and emotional health.

Getting back to the source

All of this is not to say that all those body-sculpting, “cool” yoga classes are without benefit. They can build community, foster healthy competition, and provide an avenue for staying in excellent physical shape (fitness and physical health is always a worthy priority in its own right). Studies have even shown that yoga is beneficial in the treatment of anxiety, depression, breast cancer, chronic low back pain, and hypertension.[3] The critics are merely reminding us that these were not the reasons for which yoga was developed thousands of years ago.

Here’s the real question, then: Of what is yoga capable when it’s aligned with its genuine, spiritual source?

Scientific research into the benefits of yoga is still building momentum, but we’re beginning to get a taste of what’s possible, especially from the few types of yoga that have made it their mission to realign with the practice’s original intentions. Kundalini yoga—perhaps one of the most prominent of these yoga forms—has demonstrated that it offers powerful solutions for issues on every level of the health spectrum.

Not just for fitness

Kundalini yoga certainly provides a lot of the same benefits for the physical body, when compared to other popular forms of yoga. After all, its postures and breathing techniques have somewhat of an overlap with forms like Hatha and Vinyasa. What really has researchers interested, though, is how kundalini yoga reaches beyond the physical.

For example, one remarkable study has demonstrated that kundalini yoga is effective in the treatment of obsessive-compulsive disorder (OCD). A 12-month protocol was used to treat participants, the progress of whom was monitored every three months using six different diagnostic tests. At the end of trial, those who practiced kundalini yoga significantly improved on all six test scales, compared to a group who practiced only basic mindfulness techniques and did not experience significant improvement.[4]

Kundalini yoga’s ability to catalyze this kind of psychological healing reveals what truly makes it such a potent tool—namely its capacity to overcome negative mental and emotional patterns.

Anecdotal and clinical results suggest that kundalini yoga is able to reprogram both the biological and underlying psychological patterns associated with mental and emotional pathology. For this reason, it has been thoroughly tested as a means for overcoming addiction—and it’s passed with flying colors.

A daily protocol of kundalini yoga, coupled with diet and lifestyle modifications (all of which are integrated into the kundalini yoga system of practice) dramatically aids in the process of addiction recovery, measured both quantitatively (according to diagnostic tests such as the Behavior and Symptom Modification Scale (BASIS-32) and the Quality of Recovery Index (QRI)), and qualitatively (subjects report feeling stronger, more energized, brighter, and more inspired to persist in their recovery).[5]

And even for those not recovering from substance abuse or a related addiction, kundalini yoga can still be immensely beneficial. Negative patterns stand in the way of achieving our highest potential, whether viewed from the perspective of physical health, personal fulfillment, financial abundance, or any other measure of success. Unwinding these patterns, and then recreating them to match the outcome that we desire, is the key to optimizing every level of our well-being.

Experience it for yourself

If you’ve never tried yoga, what are you waiting for? Regardless of your age, fitness, flexibility, overall health, or spiritual tendency, there’s a class out there just for you.

Even kundalini yoga has become popular enough that it’s easy to find classes. It’s an immensely powerful practice that’s worth trying, especially if you have any negative patterns that you’d like to reprogram…and don’t we all? Many people have reported that they never got hooked on yoga until they tried kundalini yoga. They claim that the practice’s life-balancing effects can be felt almost immediately—and now study data backs up their experience.

But don’t take our word for it… see for yourself and know for yourself.  After all, there’s no substitute for personal experience—and it will take years for science to catch up with the ancient transmitted wisdom of spiritual teachers.

Healing Addictive Behaviors is a great introduction to a powerful body of kundalini yoga and meditation techniques and teachings that are specifically designed to catalyze the brain changes necessary for breaking free of addiction.