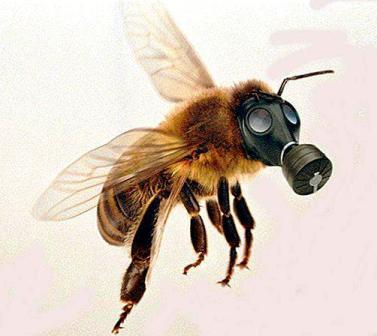 You might think that, by now, the honeybee colony collapse crisis is old news. If anything, though, it’s not being discussed enough. Bee colony collapse is an ecological calamity that threatens life as we know it on this planet (and yes, even mainstream scientists are very worried).

The problem is continuing to escalate at a shocking rate: 42% of all bee colonies in the United States collapsed in 2015 alone,[1] and scientists now believe that the extinction event towards which we’re heading would jeopardize 75% of the world’s food supply.

It’s hard to wrap our heads around this last statistic, because we’re not consciously aware of the essential role played by pollinators in our food production system. But get this: one out of every three bites of food we take is the product of bee pollination, directly or indirectly—so a shortage of bees equals a massive shortage of food.[2]

The saddest part of this whole drama is that we know what’s causing bees to die in droves…and very little is being done about it.

While various factors are to blame for bee colony collapse—including habitat loss and climate change—the poisonous pesticides used en masse by the agricultural industry are by far the biggest culprits.

Systemic pesticides—especially neonicotinoids—appear to be the most harmful to bees. These pesticides are called “systemic” because they’re designed to be absorbed into every part of the plant, where they can circulate through its tissues and thereby much more effectively kill any bug that comes into contact with it.

Pesticides made by Bayer are destroying bee colonies… why are we allowing this to happen?

Unfortunately, this design allows systemic pesticides to infiltrate every aspect of an ecosystem, including honeybees and their hives. Evidence suggests that neonicotinoids are neurotoxic to bees, and furthermore that this toxicity severely compromises their immune systems (thus leaving them vulnerable to otherwise harmless pathogens).[3]

Pesticide residues have consistently been found in the hives of collapsed bee colonies, thus conclusively linking the observed toxicity to these agricultural poisons.[4]

You’d think finding this kind of evidence at the scene of the crime would be enough to slow the momentum of pesticide usage. Sadly, though, pesticide manufacturers like Bayer continue to deny that there’s any connection between their product and bee deaths. They maintain that “all of the proteins used in insect-protected GM plants are tested for toxicity to honey bees,” and that “GM crops have not been implicated in CCD [Colony Collapse Disorder].”[5]

Notice how they cleverly avoid discussing the effects of the pesticides that are applied to GM seeds? Meanwhile, as the mainstream swallows their propaganda, the mountain of evidence incriminating pesticides as the most significant contributing factor to bee colony collapse continues to grow.

Anyone who still believes that GM crops aren’t “implicated” in the declining of bee populations should be shocked to learn what happened in Ontario in the spring of 2013 (well before the above statements were issued by pesticide companies).

When a mega-farm planted genetically modified corn using a process called “air seeding,”—one which can easily stir up neonicotinoid dust from the pretreated seeds—neighboring beekeepers watched millions of bees die within days.

One beekeeper alone lost 37 million bees (600 entire hives)—and multiple research teams called to investigate the incident cited neonicotinoid pesticides as a direct cause of the collapse.

Researchers from Purdue University confirmed that the dead bees exhibited signs of neonicotinoid poisoning, and the local Pest Management Regulatory Agency even stated that pesticide-treated corn seed “contributed to the majority of bee mortalities.”[6]

Ontario has responded by becoming the first area in North America to regulate the sale and use of neonicotinoid-treated seeds.[7]

There’s only one good thing about this entire tragic story: the cause of worldwide bee decimation is no longer a mystery. Neonicotinoid pesticides are clearly to blame, and stopping the planet’s accelerating slide toward honeybee extinction is as simple as banning the use of these poisonous chemicals. The rest of North America (and the world, for that matter), would do well to follow in Ontario’s footsteps.

Besides, systemic pesticides affect all other levels of our ecosystems too. Research demonstrates that neonicotinoids are highly toxic to birds, fish, lizards, beneficial insects,[8] and even humans (pesticide residues are often found in the final products of GM agriculture).[9]

How you can help

While some of the factors that lead to bee colony collapse are more difficult to control, it’s easy enough for us all to take action against the use of systemic pesticides.

Sign petitions like this one from the National Resources Defense Council, and support the organizations who are fighting to save bees worldwide, such as Greenpeace, The Pesticide Action Network, and Take Part.

And if you’d like to get involved in a more hands-on way, start a pesticide-free garden, or even start your own bee hive—every plot of safe space that we can create for bees is a small victory.